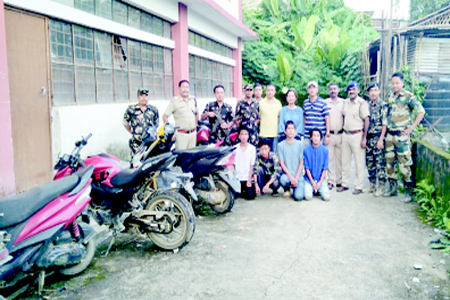 ITANAGAR, Aug 7: The police here have arrested five persons who were allegedly involved in several cases of motorcycle theft in the capital complex area, and recovered five two-wheelers from their possession.
The arrests were made following several reports of motorcycle theft received by the Itanagar police station. A team comprising PS OC Inspector T Bage, SI RK Jha and others was constituted under the supervision of Itanagar SDPO Kamdam Sikom and SP M Harsha Vardhan, and it worked out three other cases by busting the gang.
During the operation, two scooters and one motorcycle were recovered from Bida Para, Omel Aja and Ravi Rangmo, who were arrested from Seppa and Itanagar. The three were also accused of theft of another scooter.
One Bamang Raju and Hiba Kame were arrested from Itanagar in another case, and a scooter was recovered from their possession.