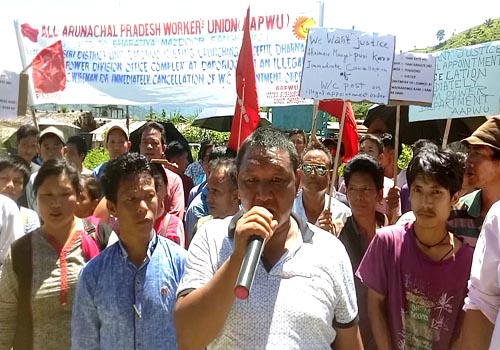 [ Karda Natam ]
DAPORIJO, Aug 17: Members of the All Arunachal Pradesh Workers’ Union (AAPWU) took out a protest march against the power department here on Friday over alleged illegal appointment of employees, and staged a dharna in front of the office of department’s executive engineer.
The workers alleged that the appointments were made without prior advertisement and in complete violation of the laid down recruitment process.
The union also submitted an ultimatum to the department, threatening to launch a series of democratic protests if its demand for scrapping the appointments is not met at the earliest.
However, Executive Engineer Made Nalo denied the union’s claim, and said he only followed the directives of the higher authority.