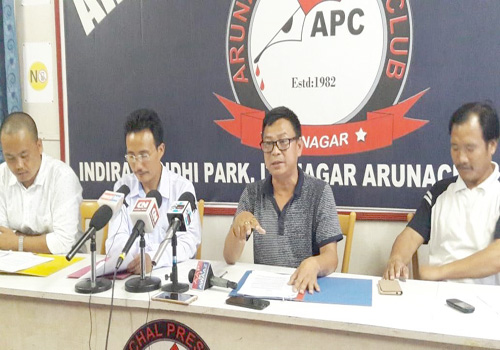 Staff Reporter
ITANAGAR, Aug 27: Apparently, the ghost of the Trans-Arunachal Highway (TAH) issue is far from gone and intends to continue haunting the state government even after the arrest of two officers and a beneficiary involved in the scam.
The TAH Land Affected People’s Forum Kamle District and Upper Yachuli (Ziro to Bopi) on Monday served a 10-day ultimatum to the state government, demanding immediate re-verification of the Potin-Bopi stretch of the TAH.
Addressing a press conference, the forum’s president, Dinesh Maga, demanded “re-verification and corrective measures” on the entire 157 km stretch of the TAH from Potin to Bopi.
“Re-verified and beneficiaries’ list from Ziro 12 km to Bopi should be displayed at the office of the deputy commissioner of Kamle district within 10 days,” Maga demanded, saying that failure to do so would invite a series of agitations, including phase-wise district bandh.
The forum said the state government undermined the sentiments of the left-out and deprived beneficiaries, especially of Kamle district, by conducting re-verification from Potin to Ziro Anya Gate only.
Saying that re-verification on only the Potin-Anya Gate stretch was injustice towards them, the forum claimed that the state government had so far not entertained the participation of the Kamle DC in any of the meetings with regard to the Potin-Bopi TAH scam.
The forum said the state government should also hand over all the relevant documents regarding the TAH from Ziro 12 km to Bopi to the Kamle DC and entrust him with the responsibility of re-verification.
The forum also demanded that the authority arrest the officers involved in the multi-crore scam, terming it “daylight robbery.” It further demanded that the state government hand over the case to the CBI for investigation.