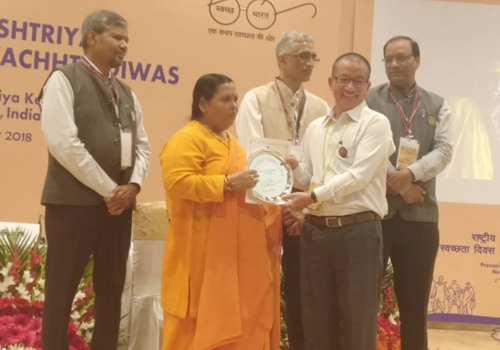 ITANAGAR, Oct 3: Tawang district of the state has been adjudged as the cleanest district in the entire North-East India by Swachh Survekshan Gramin (SSG)-2018.
The SSG-2018 was conducted by a third party independent agency engaged by the Ministry of Drinking Water & Sanitation, Government of India from 1 to 31 August, 2018 across the country in 698 districts.
The evaluation process was based on: direct observation of Sanitation in public places (30%), citizen feedback (35%) and service level progress on sanitation as per Swachh Bharat Mission (Gramin), IMIS (35%) parameters, according to a press statement.
Union Minister for Drinking Water & Sanitation Uma Bharti gave away the award to the state on 2nd October commemorating the 150th birth anniversary of Mahatma Gandhi.
SBM (G) of PHE & WS Department Mission Director Sentum Yomcha, received the award on behalf of the state government.
The SSG-2018 was launched by Chief Minister Pema Khandu on 25th July, 2018 followed by district level launch by respective deputy commissioners under the guidance of the chief secretary.
The state government had supported the objectives of SBM (G) in the state by funding exclusively for reconstruction of defunct and conversion of unsanitary toilets to sanitary toilets.
The state government earlier provided additional incentives of Rs 8000 per individual household latrines (IHHL) which had boosted the rural masses to adopt IHHL at the enhanced cost of Rs 20,000 per IHHL.
During the current year, the state government has allocated Rs 30 crores in the budget for reconstruction of defunct toilets and to address the solid-liquid waste in the rural administrative centres on pilot basis.
The chief minister has hailed the deputy commissioner of Tawang and the team of SBM (G) for making their district the first ODF district during September, 2017 in the state and making it the cleanest district a year after, in the entire North East region. (CMO)