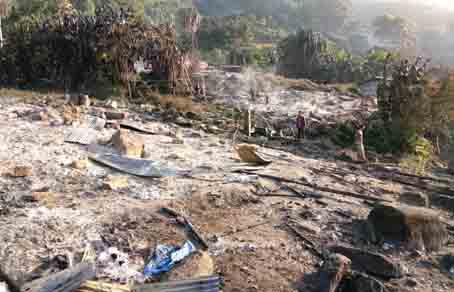 BOLE, Oct 11: Five houses were completely destroyed in a fire that broke out at Bole village in West Siang district on 9 October, at around 11.30 pm.
No casualty was reported in the incident, but it is reported that livestock was killed and properties damaged in the fire.
Yomcha ADC Atul Tayeng and former ZPM Yiyom Yomcha rushed to the site of the incident to assess the damages, and distributed relief materials and cash among the affected families, on behalf of local MLA Nyamar Karbak.
Members of civil society and student unions also rushed to the interior village and provided immediate relief to the affected families. (DIPRO)