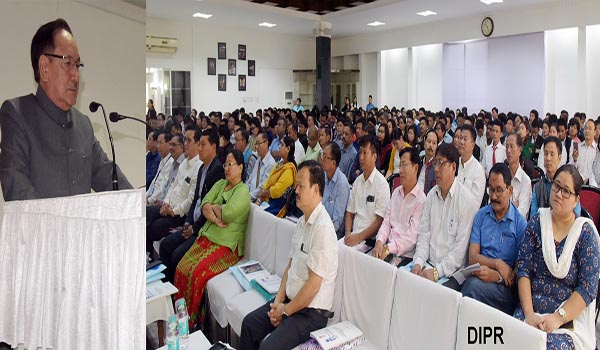 NAHARLAGUN, Oct 12: The State Information Commission (SIC) in collaboration with the DoPT under Central government organized an awareness programme on effective implementation of the Right to Information (RTI) Act, 2005 at the state banquet hall here on Friday.
Chief Information Commissioner (CIC), Dr Joram Begi, in his keynote address, said that the RTI Act, 2005 is a landmark legislation that has transformed the relationship between the citizen and the state.
“The necessity to enact the Act was to combat the numerous scams that were prevailing in the country, to empower the citizen and to promote transparency and accountability in the working system of the governance on day-to-day basis,” Begi said.
Terming the RTI Act also as ‘Sunshine’ Act, which is working towards transparency and corruption-free governance, Dr Begi advised the information seekers and information givers (PIOs) not to misuse the Act.
The CIC also advised the media persons, being the fourth state organ, to shoulder the responsibility to make the state accountable and transparent.
“The RTI law has given a greater and wider space for the media to play important role in empowering people and consolidating a democratic polity. By using this legislation, the media can investigate and expose issues of wider public interest,” the CIC said.
He said that the media, as the guardian of freedom of speech, can open up “closed doors” to transparency and accountability by disseminating information about RTI to secure people’s fundamental right to know.
He also advised the teachers and students to spread the information about RTI on a larger scale and make use of the awareness programme.
State Information Commissioner (SIC), A K Techi, in his power point presentation, gave a brief report on APIC.
He informed that since 2014, 2246 cases were registered, 68 cases imposed penalty, 1041 cases disposed off by the Commission and 61 cases were still in progress.
SIC Nanong Jamoh talked about how to seek information, while SIC Mathiem Lenggi talked about Obligation of Public Authorities – Suo Motu disclosure of Information and exemption from disclosure of information in the technical session.
High ranking government officers, including commissioners, secretaries, chief engineers, directors, PIOs, and teachers, students, RTI activists, media persons and NGOs attended the programme. (DIPR)