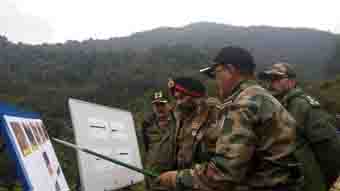 ITANAGAR, Nov 21: The Director General of Border Roads Organization (BRO) Lt. General Harpal Singh informed Chief Minister Pema Khandu that significant achievement has been made on improving the two-lane 317 kms long Balipara-Charduar-Tawang (BCT) road, which is the lifeline of West Kameng and Tawang districts.
The DGBR had on Wednesday, called on the CM to apprise about the status of road works in the state under Border Roads Organisation.
Earlier, DGBR, Lt Gen Harpal Singh had reviewed the progress of works on operationally critical roads in the area of responsibility of Project Arunank from 20 to 21 November.
He inspected TCC-Taksing and TCC-Bidak road and Bailey Bridges on various streams and rivers for fair weather connectivity to Taksing and Bidak. He also carried out the inspection of Hapoli – Sarli – Huri road on 21 November.
The DGBR informed that stretch from 0-50 km road has been completed while, the stretch from 70-88 km is being carried out on EPC mode.
Both also discussed on status of Dirang bypass and Jung bypass included under the BCT road.
Singh informed that he had recently inspected the roads from Tama Chung Chung (TCC) to Taksing and TCC to Bidak and said that vehicles are now running upto Tama Chung Chung from Nacho. “Blacktopping works have also completed upto 55km from Nacho and by this year significant work will be completed stretching towards Lemiking and beyond,” he added.
Further, the DGBR said that the construction work of Sela tunnel will begin from January next year.
“Tenders have been floated and administration from Tawang and West Kameng has ratified joint surveys,” he informed and sought support of the state government for statutory clearances to which Chief Minister assured all his support.
The Chief Minister requested the BRO to expedite work on improving the road from PTSO lake to Bumla pass and exhorted them to ensure timely completion of the task with highest quality.
On the same day, Singh also called on Arunachal Pradesh Governor B.D. Mishra at Raj Bhavan, here to discuss on steps to be taken to strengthen the state’s road communication.
Highlighting the importance of road communication in remote regions of Arunachal Pradesh, the Governor stressed on the need for making proper all weather roads.
The Governor also suggested the DG, BRO to study the road construction issues from Miao to Vijoynagar under Changlang district, one of the remotest circle administration centres of the state.
The Director General of Border Roads Organization on his part assured the Governor of the support of his organization for the construction and upkeep of the roads in the state. (CMO / Raj Bhawan)