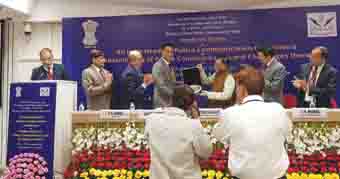 NEW DELHI, Nov 21: The Arunachal Pradesh Police Department was presented best performing state award in the category of Police Communication training to Police officials by the Directorate of Coordination of Police Wireless, Union Ministry of Home Affairs.
Superintendent of Police (Telecom), Shankar Chaudhury, on behalf of Director General of Police (DGP), S B K Singh received the award from Minister of State for Labour and Employment (Independent Charge), Santosh Gangwar during All India Heads of Police Communication Conference – 2018 held here on Tuesday.
It may be mentioned here that a dedicated Signal Training Centre has been set up at PTC Banderdewa by the Arunachal Pradesh Police department under the guidance of DGP SBK Singh to impart training in Wireless Communication to Police officials.
The department has started focusing relentlessly on improving training of personnel, both quantitatively and qualitatively, to improve the skills and attitude of personnel and make Arunachal Pradesh Police professional and an effective police force, according to an official release.