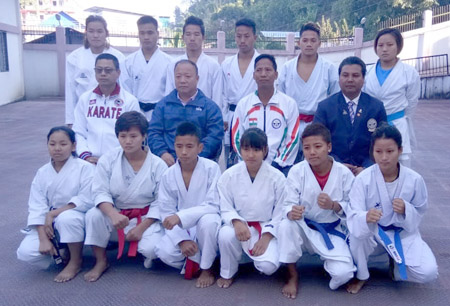 Staff Reporter
ITANAGAR, Nov 25: Twelve karatekas from Arunachal Pradesh will represent the country at the 9th Commonwealth Karate Championship to be held at Durban, South Africa, from 29 November to 2 December.
The karatekas are (females) Lipin Ete, Kina Sipa, Yanung Gamnu, Johny Mangkhiya, Goda Asha, Bamang Yamua, Mesom Singhi, (males) Deepak Jamoh, Samem Romat, Raja Yangfo, Mojum Dodum and Lodar Tong.
They have been selected on the basis of their performance in the last national karate championship, which was conducted by the Karate Association of India earlier this year, informed Arunachal Karate-Do Association (AKA) president Likha Tara.
The team will participate in sub-junior, cadet, junior, under-21 and senior categories.
AKA general secretary Bulang Marik is the Team India coach.
The karatekas from the state will join the rest of the team in Mumbai on 26 November and depart for South Africa on the same day.
Meanwhile, Tara, who also is the president of the North East States Karate Federation of India (NESKFI), on behalf of the NESKFI and the AKA congratulated MC Mary Kom for winning her sixth World Championship gold.
“We are feeling proud of you and your achievement, and are confident that you will continue with even more successes,” said Tara.