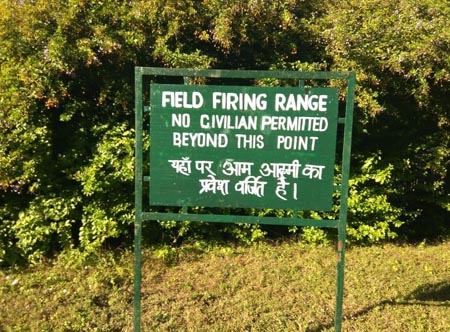 [ Amar Sangno ]
ITANAGAR, Nov 25: Three minors, including a toddler, were reportedly killed when an undetonated mortar shell went off at Chirang village in Hayuliang circle of Anjaw district on Saturday.
The incident occurred at around 5:30 pm, Superintendent of Police Habung Hailyang informed on Sunday morning over telephone.
The victims were identified as Amisa Krong (10), daughter of Batingso Krong, Riya Krong (8), daughter of Sobung Krong, and Yumang Krong (2), son of Shibso Krong, the SP informed.
He said the incident occurred when the children were believed to be playing with mortar shells collected from the nearby armed forces firing range (Nara Tiding field firing range). The deceased minors mostly sustained severe head injuries, he said.
“The district police have cordoned off the place, and sought a bomb disposal team, as there are many shells still there to be examined,” the SP said. “We are yet to ascertain how the mortar shells exploded; that’s why we have sealed off the place till the bomb disposal team arrives.”
Hailyang said the police are nevertheless conducting an investigation to ascertain the cause of death. “An unnatural death case has been registered at the Hayuliang police station,” he informed.
Chirang village, with a population of approximately 800, is located adjacent to the Nara Tiding field firing range, which the Indian’s Army’s artillery division and the ITBP have been using for firing exercises. The army said the area has been duly notified by the state’s home department through the district administration.
On 17 May this year, the home department extended the permission for use of the notified area for carrying out field firing and artillery practice for one year. It comes under Sub-section (2) of the Manoeuvres, Field Firing and Artillery Practice Act, 1938, read with Sub-section 3 of the North East Frontier Agency (Construction of Reference to the State Government) Regulation, 1965 (Regulation No 4 of 1965).
An official source in the army said the area has already been notified through the district administration, and that a public notice cautioning people not to venture into the firing range had been served.
“The people of the village are also aware about the prohibitory notice, and they should educate their children about the dangers of leftover mortar shells,” the source said.
“The army should not be blamed for the incident. The area is an already notified area. Moreover, the incident occurred at the village. It is for the police to find out how the explosion took place,” said an army official.
According to a source in Anjaw, the villagers collect leftover mortar shells from the firing range to melt them for sale. It is alleged that neither the district administration nor the army conducts awareness programmes to sensitize the villagers to the dangers of mortars, and that there is lack of coordination between the administration and the army, which may have led to the fatal incident. Neither party was available to comment on the allegation.

Meanwhile, Chief Minister Pema Khandu in a statement said, “Such incidents should not recur, for which extreme precautionary measures have to be put in place by the army, the civil administration and the village elders.”
He requested the villagers against going to danger zones like the army firing range which pose a threat to human lives. The CM also requested the army to “issue an advisory or put up boards depicting the danger zones and restricted areas, so that villagers and other people do not trespass such areas.”
Extending heartfelt condolences to the bereaved families, the CM said he, along with the people of Arunachal Pradesh, stands with the aggrieved families in their time of distress.
Pema announced ex gratia of Rs 4 lakhs each to the next of kin of the deceased from the CM’s relief fund.