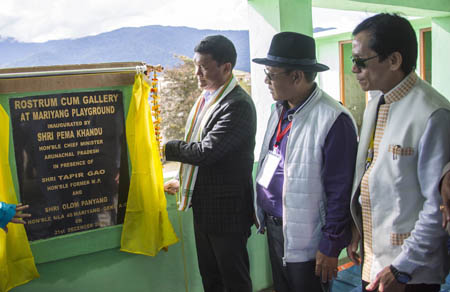 MARIYANG, Dec 21: “Arunachal Pradesh has earned a bad reputation due to bad election practices, which has resulted in backwardness of the state on all fronts,” said Chief Minister Pema Khandu during a public meeting here in Upper Siang district on Friday.
Arunachal will go to polls for both assembly and parliamentary constituencies by April next year.
“Money culture in elections has deprived the common people of real development as either leaders spend their five years in accumulating wealth or leaders not fit to be leaders sit on the chair,” Pema said
The CM exhorted the people of the state to ensure clean electioneering “this time around and always, shunning the cash-for-votes culture.”
He urged the people to use their franchise to elect leaders who would actually work for their welfare and the development of the state without demanding personal favours.
“After the creation of the Staff Selection Board, favours like job-for-vote are not possible anymore. Now you have to also ensure that cash-for-vote practice is thwarted if you wish to see development in real sense,” he said.
Hinting at bringing about “hard reforms” in the system in the near future, Pema said he has already started the exercise to bring in reforms by forming committees of experts drawn from various backgrounds.
Expressing confidence of forming the government again in 2019, he said the reforms would be implemented “immediately after the elections.”
The top three sectors that would see major reforms would be health, education and agri-allied sectors, he said.
The CM also expressed confidence that Arunachal would continue to receive the Centre’s attention as “Narendra Modi will return as the prime minister even after 2019.”
Responding to a memorandum submitted by Mariyang-Geku MLA Olom Panyang, Pema assured to provide assistance in fulfilling the demands, which include construction of an unfinished 2 mw hydel project over the Sidik river, border road to Singa and Anini, development of road network and cc pavements in Mariyang township and nearby villages, and establishment of a sub-treasury office and an SBI branch here.
Earlier, the CM inaugurated the office of the urban development & housing department’s assistant engineer, a ‘rostrum-cum-gallery’ at the Mariyang ground, the Giidi Notko public hall, and a Donyi-Polo ganggin.
Among others, Rural Development Minister Alo Libang, state BJP president Tapir Gao, government officers and GBs attended the meeting. (CMO)