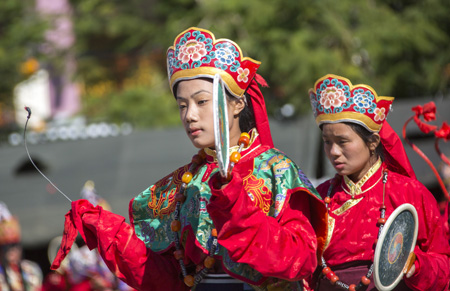 TUTING, Jan 8: Chief Minister Pema Khandu on Tuesday joined the Buddhist community of Tuting subdivision in Upper Siang district in celebrating Losar festival at the Ngesang Do-Ngag Jangchup Dargyelling Nyingmapa monastery here.
The celebration began with the release of lungtah (balloons) by the monastery’s abbot Khen Rinpoche Tsering Dorjee, the CM, and other guests.
“Tuting displays the true rich cultural heritage of Arunachal with its diverse languages and cultures. The subdivision also reflects the spirit of unity in diversity with five tribes coexisting peacefully for generations,” Pema said.
Responding to a memorandum submitted by
the Chime Yansang Pema Kod Welfare Society of Tuting, the CM promised to sanction fund for construction of a Buddha park and a Buddha statue under the Swadesh Darshan scheme.
“If the project does not qualify to be funded under Swadesh Darshan, fund will be made available from the state’s own resources,” he said.
For further development of tourism and cultural infrastructure in the area, the CM promised to send a consultant to work out a plan for the development of the ‘Buddhist circuit’.
“The Buddhist circuit will connect all the Buddhist religious places in the state through development of infrastructures along the circuit,” he said.
Pema said Tuting, being culturally linked to Buddhism, has the potential to attract domestic and foreign tourists because of its religious and cultural significance, and promised the state government’s assistance in developing the area as a major tourist site.
The CM also informed that funds have been sanctioned to meet the locals’ demand for a sub-treasury office, a tourist lodge, and a protection wall for the ADC office here.
Earlier, the CM inaugurated the welcome gate of Tuting monastery, visited the monastery, and lit the lamp to invoke the blessings of the almighty.
The celebration also featured Serek Cham dance performed by monks, the Lingdro Geysar dance of the Memba-Khamba tribe performed by school and college students, and a mass Ponung dance by artistes representing the five tribes of Tuting subdivision – Memba, Khamba, Adi, Tangam and the Mishmi.
Among others, DCM Chowna Mein, state BJP president Tapir Gao, Health Minister Alo Libang, Mechuka MLA Pasang Dorjee Sona, and Mariyang MLA Olom Panyang attended the celebration. (CMO)