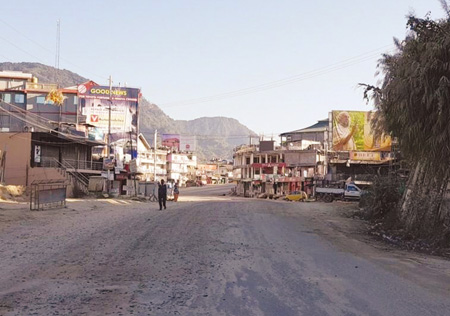 ITANAGAR, Jan 8: The Citizenship (Amendment) Bill was passed in the Lok Sabha (LS) on Tuesday amid protests by the opposition and the shutdown called by the North East Students’ Organisation (NESO) across Northeast India.
The NESO and its federal units in the seven Northeast states clamped the 11-hour bandh across the region on 8 January to protest against the bill.
Speaking to this daily, NESO and All Assam Students’ Union (AASU) advisor Samujjal Bhattacharya said the passing of the bill by the BJP government in the Lok Sabha despite protests from the opposition and complete shutdown across the Northeast region showed “the undemocratic and selfish attitude of the BJP government to increase its vote bank.”
The bill, he said, was against the Assam Accord of 1985 and designed to marginalize the indigenous people of the Northeast.
Noting that the bill has to go through the Rajya Sabha, which has been extended till Wednesday, Bhattacharya expressed apprehension that the BJP might try to get it passed there as well.
Referring to the negligent attitude of the government towards Northeast India, Bhattacharya said, “The Modi government and the national media should realize that there is another part of the country beyond Kolkata.”
He affirmed that the NESO would continue with its movement along with its federal units after the Rajya Sabha session.
Bhattacharya also condemned the shooting incident in Tripura where several protestors received severe gunshot wounds during the bandh hours.
Additionally, he said, the NESO was concerned about the Chakma-Hajong refugee issue of Arunachal and would look into it, as well.
In a joint press statement this evening, NESO chairman Samuel B Jyrwa and secretary-general Sinam Prakash Singh said the passage of the bill in the Lok Sabha despite protests across the Northeast “only goes to show that the government of India has no regard for the indigenous people of the Northeast… This move is intentionally done to reduce the indigenous people of the Northeast to a minority in our own land.”
Joining its six sister states, Arunachal Pradesh also observed the 11-hour bandh called by the NESO, with the All Arunachal Pradesh Students’ Union (AAPSU) leading the shutdown here, along with its federal and district units.
The union’s members received support from the masses and did not have to resort to any form of force.
AAPSU members burnt copies of the citizenship amendment bill on the streets of Itanagar and Naharlagun, and shops and institutes remained closed till 4 pm.
While private vehicles remained off the roads, students and candidates appearing for their school and competitive examinations were exempted from the purview of the bandh.
However, the absence of passenger vehicles forced several people who arrived at the Naharlagun railway station to foot it to their homes in various parts of the capital. A passenger bus arriving from Guwahati was stopped near Takar Complex in Naharlagun, and the passengers were later transported to their destinations in a police vehicle.
Our correspondent in Lower Dibang Valley HQ Roing reports that the bandh passed off peacefully there.
All the shops were closed and vehicular movement was minimal in the district. Government schools and offices remained open, but there was not much public movement.
According to reports from Daporijo in Upper Subansiri district, three people were detained, and released later in the day.
Several other districts, such as East Kameng, West Kameng, Kurung Kumey, West Siang, Leparada, Kamle, Upper Siang, Namsai, etc, largely reported peaceful protests with sloganeering, and complete shutdown of markets, institutes and offices.
Later in the evening, AAPSU president Hawa Bagang and general secretary Tobom Dai said it was unfortunate that the bill was passed in the Lok Sabha despite objection from the people of the Northeast.
“This act of the central government has exposed its step-motherly attitude towards the people of the Northeast… The bill may foment more trouble in the days to come because, in the guise of democracy and majoritarianism, the central government has totally forsaken the very sanctity of our survival,” Dai said.
NESO coordinator for Arunachal, Pritam Waii Sonam, also asked the state government to make its stand on the issue clear.
The NESO and its federal units – the AAPSU, the Khasi Students’ Union, the Garo Students’ Union, the AASU, the Naga Students’ Federation, the Mizo Zirlai Pawl, the Twipra Students’ Federation and the All Manipur Students’ Union – thanked the public of the seven Northeast states for their cooperation in making the bandh a success.
They regretted the inconvenience caused, and said it was the only alternative to highlight the strong resentment against the citizenship amendment bill.