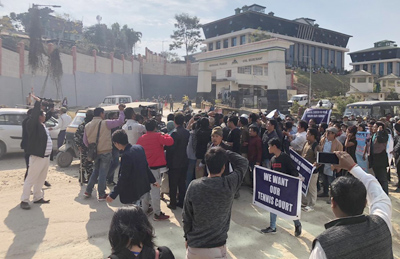 Staff Reporter
ITANAGAR, Jan 9: Barely a day after the Bharatiya Janata Party’s(BJP) top brass laid the foundation stone of its office construction site at the tennis court in IG Park here with a ‘bhumi pujan’, the Arunachal Civil Society (ACS) led a massive rally against it on Wednesday and gave seven days’ ultimatum to the state government to cancel the allotments against the land.
The rally was supported by various organisations, including the Arunachal Pradesh Youth Congress, National Peoples’ Party youth wing and many others.
Condemning the “land-grabbing attitude” of the BJP led government, the protesters demanded immediate cancellation of the allotment to the BJP and the Wado-Kai Karate Association.
“If the state government has put blanket ban on land allotment, how has it allotted land to the BJP and the Wado-Kai Karate Association,” ACS chairman Patey Tayum asked, adding “Even after the district administration had sent negative reports on allotting the plot to the BJP and the karate association in July 2017 and August 2018, the allotments were issued.”
He further claimed that the BJP government is allotting the tennis court area to do away with protest rallies against the government as the said area is considered as the only designated place where people can stage protests.
Earlier in the morning, there was a minor scuffle between the protestors and security forces near the Civil Secretariat gate.
The security forces tried to bundle APYC president Geli Ete, when Ete tried to march ahead of the protesters.
Later, the security forces conceded and allowed the agitators to stage a protest at the tennis court.
The organisations have served seven days ultimatum to the state government to cancel the allotments, and warned that failure to comply with the demand will invite series of protests.