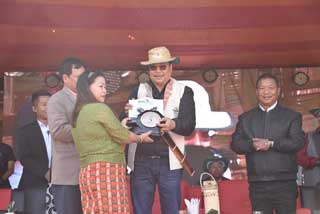 SEIJOSA, Jan 18: The 4th edition of the three-day Pakke Paga Hornbill Festival (PPHF) got underway on the bank of the Pakke river here in Pakke-Kessang district on Friday.
Addressing the inaugural function, Deputy CM Chowna Mein lauded the people of the district for leading by example in terms of conservation efforts and said: “With this wildlife conservation festival, a message of love for Mother Nature and conservation of wildlife should be sent to the other parts of the state, and such wildlife conservation awareness must be done in other areas too.”
Citing a study conducted by the scientists of the Centre for Biological Diversity, Mein said, “The rate of extinction (of flora and fauna) is as high as 1000 times greater than the natural rate of extinction due to the destructive nature of human activities and climate change (worldwide).”
He said, however, that though the world has lost “almost millions of wildlife species,” Arunachal is fortunate to have a forest cover of about 82% of its total area, and to be ranked among the 10th richest biodiversity hotspots of the world.
The DCM also said the state could become “the ultimate place for wildlife and cultural tourism” if wildlife conservation is promoted rigorously.
Saying it was high time to take up the matter of conservation seriously, Mein assured to provide a package for the preservation of the wildlife sanctuaries of the state in the coming budget session.
He asked Chief Conservator of Forests (Wildlife & Biodiversity) Prabhat Tyagi to “prepare and propose innovative schemes under wildlife conservation for incorporation in the next budget.”
RWD Minister Bamang Felix in his address said there has been an increase in the hornbill population in Pakke Tiger Reserve (PTR) over the last three years, “after the festival began,” and lauded the local community for their conservation efforts.
Felix vehemently discouraged hunting, and called for “total abstinence from eating wild meats, in order to protect the wildlife species.”
As a gesture of encouraging the people in their conservation efforts, he provided financial assistance for planting trees in PTR, and for nurturing the trees after planting.
Pakke-Kessang MLA Biyuram Waghe and festival celebration committee chairman Takum Nabum also spoke.
The dignitaries visited the exhibition stalls put up by various NGOs, SHGs and departments in the festival ground.
Cultural items were also presented on the occasion.
After the inaugural function, the dignitaries went on a jungle safari inside PTR and spotted wreathed hornbills, oriental pied hornbills and many other bird species during their ride.
The three-day event will feature adventure, tourism and sports activities, besides a workshop on organic dye, bamboo and coconut crafts, organic farming, a fashion show, and cultural presentations. (DCMO)