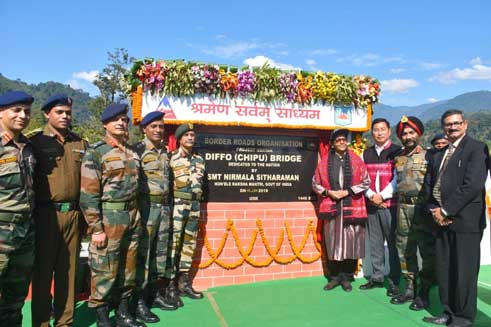 ROING, Jan 18: Defence Minister Nirmala Sitharaman on Friday inaugurated the bridge over the Diphu (Chipu) river in Lower Dibang Valley district, in the presence of state Agriculture Minister Dr Mohesh Chai, the deputy commissioner, defence and BRO personnel, and others.
The defence minister commended the BRO for completing the construction of the bridge that will facilitate the movement of troops and also link the markets of the neighbouring districts.
“Although the bridge took a long time (seven years) to complete, I commend the BRO on the good quality roads and bridges, and for bringing connectivity to the area,” Sitharaman said.
“Speed in work execution, use of new technology, outsourcing of work, if required, for timely completion of work, and a renewed vigour is needed to provide connectivity to area,” she added.
BRO DG Harpal Singh briefed the minister on the BRO’s works in the state and said the bridge over the Diphu (Chipu) river, which is a part of the Trans-Arunachal Highway (NH 13), will link the neighbouring districts and open up local markets.
The bridge, funded by the road, transport & highways ministry, is 426.60 metres long. The construction work started in March 2011 and was completed in December 2018, at the cost of 4847.83 lakhs.
Earlier, Sitharaman visited the forward areas along the India-China border in Dibang Valley district.
She overflew the forward locations along the Line of Actual Control and visited the army post in Anini, located at an altitude of 5300 feet. She was accompanied by Eastern Army Commander Lt Gen MM Naravane, Spear Corps GOC Lt Gen Rajeev Sirohi, and other military and civil officials.
At the forward post the minister was briefed on the operational situation and defence preparedness of the armed forces in Dibang Valley.
She also interacted with the troops and expressed appreciation for their dedication and selfless service in protecting India’s borders in such inhospitable terrain. (DIPRO with input from Defence PRO)