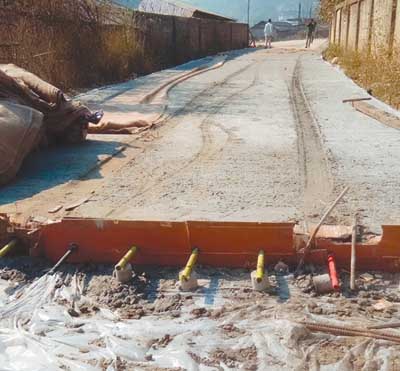 Staff Reporter
NIRJULI, Jan 22: Barely a few days after the report on the damage to the under-construction cement concrete (CC) road in between Rayo and Anya Colonies here was out, the Naharlagun PWD division on Tuesday said unidentified persons again damaged the freshly laid CC road on Monday.
“Despite our repeated appeals, some people are hell bent on destroying the newly constructed CC road. This is really unfortunate. Such anti-development attitude will hurt the progress of projects in the capital complex and harm the image of the state capital,” the division’s Executive Engineer, Techi Nabo, said.
He urged the people to cooperate with the department in completing the project on time.
Meanwhile, speaking to this daily, a worker informed that some antisocial elements even attacked the labourers.
“We work well past midnight. Often, people beat up the labourers without any reason.
When we try to stop them from riding their bikes on the newly laid CC road, they attack us. They have even stolen construction materials from the site. It is really difficult to work in this kind of atmosphere,” the worker said.