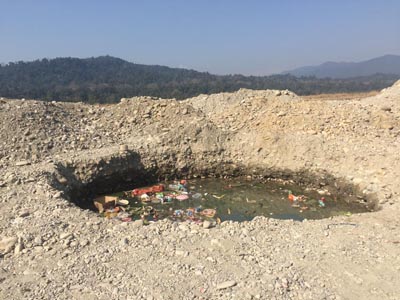 [ Tongam Rina ]
On a whim, I decided to attend the Pakke Paga (great Indian hornbill) Festival, which was held at Seijosa in Pakke-Kessang district from 18 to 21 January.
However, on the day the event was to be inaugurated, there was an Assam bandh, which almost made me cancel my plan. But I managed to hop onto the chopper carrying the chief guest of the event, Deputy Chief Minister Chowna Mein, and his entourage.
Less than 25 minutes after we took off from Naharlagun, we were on the festival ground, on the bank of the Pakke river in Seijosa. That’s when I spotted an elephant who clearly did not seem impressed with what was going around.
Anyways, the festivities started soon, with the usual welcome dance, the offering of gifts to the guests, and the well rehearsed speeches. I was intrigued that people were clapping when the DCM and minister Bamang Felix spoke on the need of conservation and how hunting was responsible for the diminishing wildlife.
But then, Seijosa is different. Despite all its problems, Seijosa area, home to the Pakke Tiger Reserve (PTR), has been a successful model of conservation in the entire country. Due to the efforts of now legendary Forest Officer Tana Tapi and his team, the Ghora Aabhe Society – a group of gaon burahs, NGOs and local communities – Pakke is a shining example of what can be achieved when communities and departments come together.
After the formal inauguration ended, I ventured into the huts selling food items – some 20 huts, from one stall selling miracle tea to another selling sago palm. Each stall had a large bamboo dustbin and a notice announcing that it was a plastic-, smoke- and IMFL-free zone.
My satisfaction was short-lived as I realized that the notices had been put up for the sake of it. There were plenty of plastics, smoke and IMFL in the entire festival ground.
That was the first of many disappointments that I encountered during my four-day stay.
The festival was like any other state festival of Arunachal: an overdose of VIPs and VIP-centric events, a beauty pageant, lots and lots of modern songs and dances, with an ATV ride thrown in. I was not sure if the festival had anything to do with conservation. It did not seem that way to me. It was not even a cultural one. It appeared to be one confused festival trying to figure out what it was meant for.
The festival ground was on a sand-and-gravel mining site, and the entire stretch of the river itself is being mined, making way for imminent flood. As if this was not enough, there was a pit dug next to the river, where some of the festival’s waste, mostly plastic, was being dumped.
If the organisers of the Pakke Paga Festival are serious about celebrating nature (as the festival’s tagline states) they have to rethink and come up with a festival model which revolves around conservation.
Also, there seemed little involvement of the communities. The communities who have been at the centre of the conservation efforts in Pakke need to be involved. Instead of having outsiders pitch tents, open up homestays in the villages. Now the festival committee needs to ask how many tourists came and how many homestays were opened and used.
The celebration committee and the tourism and forest departments must come together to find out how best the festival can be celebrated.
Seijosa has so much to offer. Therefore, keep the festival different and unique. Do away with the usual boring stuff that is the hallmark of any other festival of the state.
The Pakke Paga Festival already has lots to offer; it only needs to be managed well. Offer visitors the opportunity to know the local Nyishi communities that have been at the forefront of the conservation efforts. All said and done, conservation cannot be carried out in isolation, without involving communities, in the context of Arunachal.
The PTR is not even a kilometre from the festival site. Make sure visitors get lost in the forest for a few hours, watching birds and animals without disturbing them. Tourists will be more than willing to pay. Where else in Arunachal would you find the diversity that Pakke offers?
Perhaps I will go back to the festival next year. Even if the festival is still the same, I already look forward to getting lost inside the tiger reserve, spotting wildlife in its many-hued splendour. Yours truly will also head back to Darlong village, near the festival site, hoping to catch sight of the hornbills. Where else in Arunachal can you find 80 hornbills flocking together in a village?
Remember that elephant near the landing ground? Apparently, it had been brought to the festival ground to welcome the guests arriving in choppers. However, before saluting the guests and without trampling on anyone, the elephant ran way, probably scared by the noise of the chopper.