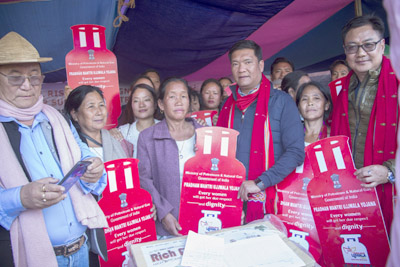 DAPORIJO, Jan 23: Chief Minister Pema Khandu has assured to sanction Rs 15 crore for construction of infrastructure at permanent site of the Government Degree Model College here in Upper Subansiri district.
He announced this during a public function after launching the third leg of the Arunachal Rising campaign here on Wednesday.
Stating that the fund will be sanctioned by 30 January, the chief minister asked the department concerned to immediately submit the DPR for its immediate approval.
Responding to a four-point public memorandum submitted to him, the chief minister assured to address all connectivity issues as the government is giving highest priority to the sector.
“Under PMGSY, the Centre has allotted about Rs 4000 crore and more funds are waiting to be sanctioned,” he informed.
Upper Subansiri district alone has 10-12 projects under PMGSY sanctioned, he said.
He further informed that for construction of a new school building for the government highger secondary school of Daporijo, sanction orders for a construction of new building have been already issued.
Earlier, the chief minister on his arrival here inaugurated the mini outdoor stadium, extension of community hall at Ekke village, CC steps and concrete railing at Ringdo Tarak and Riley Sokio, extension of Mell Botom tourist lodge, model district library and reading room, installation of solar street light at model village Taksing and Gelemo and approach road from PWD road to Gumsing model village.
Pema also visited the Sarkar Aapke Dwar camp being held at Si-Donyi ground and inspected the stalls put up by different departments.
On the occasion, the chief minister gave away free LPG connections to the beneficiaries.
He also felicitated the ASHA, Anganwadi workers, progressive farmers and the winners of the essay competition of Arunachal Rising campaign. He also issued certificates to the beneficiaries under National Social Assistance Programme.
On the occasion, the CM released an Arunachal Rising campaign brochure and pamphlets that contains detailed information on all flagships programmes of the state and the centre.
The chief minister was accompanied by MoS Home Kiren Rijiju, MLA Punji Mara, MLA Pangka Bage, MLA Dikto Yekar and other dignitaries.
The chief minister also launched the third leg of Arunachal Rising campaign in Taliha on Wednesday.
Speaking at a public function, Chief Minister said road map is being prepared and state government with help from Centre is working to develop connectivity in TALIHA and Nacho area.
“Once connectivity improves, the region will see decrease in distress migration as people are migrating towards district headquarters Daporijio for better facilities and opportunities,” he said.
He informed that under PMGSY, five road projects have been launched in the Nacho-Taliha region.
The chief minister further informed that more than Rs 10 crore will be sanctioned for construction of a meeting hall in Taliha and Rs 10 crore has been sanctioned already for construction of a stadium here.
Earlier on Tuesday, the CM also launched the third leg of the Arunachal Rising campaign and dedicated the Paniasang administrative circle, 2x500kw Payu MHS, district museum, district court, Chera Talo district hospital, office of the superintendent of police, mega water treatment plant, working women’s hostel, rural works department sub-division at Patuk and government secondary school at Nikja.
He also laid foundation for an industrial training institute and fire station.
He assured to take up all public demands for infrastructure development in Kurung Kumey district, such as advanced landing ground, mega hydro project at Kuru River, multipurpose stadium and a ring road for Koloriang town, and informed that a new Kendriya Vidyalaya for the district has also been cleared by the centre.
Taking serious note of the regular absence of heads of departments, government officers and officials from the district, the chief minister asked the deputy commissioner to take strict disciplinary actions against the erring officers.
Pema also assured to raise the honorarium for gaon burahs, ASHA workers and Angandwadi workers by bringing the matter in the cabinet for discussion. He promised to create more posts of teachers exclusively under the SSA for batch-wise regularisation.
Later, the CM addressed a similar programme at Nacho the same day, and said to bridge the gap between the government and the people, a Jan Sampark Abhiyan has been started under the banner of Arunachal Rising campaign, he informed.
“The purpose of the government is not to work behind closed doors but to provide maximum benefit to its people by reaching out to them,” he added. (CMO)