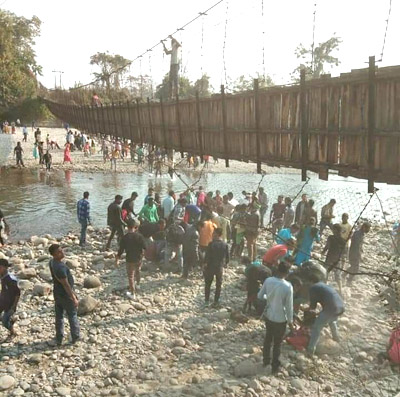 Staff Reporter
ITANAGAR, Jan 27: Several picnickers from Assam were injured when the rope wire suspension bridge over the Passo river, in Dissing Passo circle of Pakke-Kessang district, collapsed on Saturday.
According to Pakke-Kessang SP Jimmy Chiram, at least four persons, including a minor girl, were injured in the incident, which occurred at around 1:30 pm, when the excited picnickers overcrowded the dilapidated suspension bridge and started taking selfies during the picnic hour, defying the prohibitory notice.
The injured persons were evacuated to a hospital in Biswanath Chariali, Assam.
It is reported that one of the persons fell off the bridge along with his motorcycle when he attempted to cross the bridge on the bike.