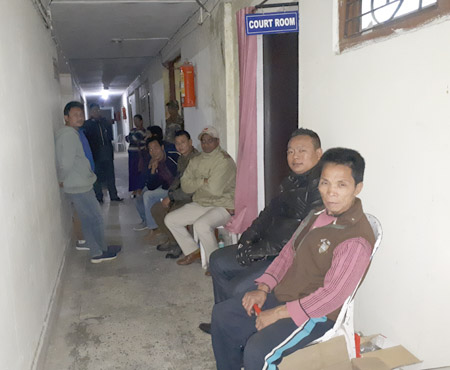 YUPIA, Feb 1: The distribution of land compensation for construction of the greenfield airport in Hollongi in Papum Pare district began at the office of the deputy commissioner here on Friday.
The distribution process was carried out in an open court at the DC office premises, where the officials and officers of the district administration were seen helping the landowners and their family members in filling up the forms and other documents after verifying the list of beneficiaries.
Speaking to the media, Deputy Commissioner Dr Joram Beda said the administration has published the beneficiaries’ names in the local dailies.
“We established an open court so that the landowners and beneficiaries do not face problems in filling up forms and other documents. There are, so far, 199 beneficiaries. Most of them turned up, and it was a huge rush. We expect to complete the whole process within the next few days,” the DC said.
The beneficiaries, though, seemed a bit upset about the rate of the compensation, and said they were accepting the compensation in the greater interest of the state as an airport would accelerate the pace of development.