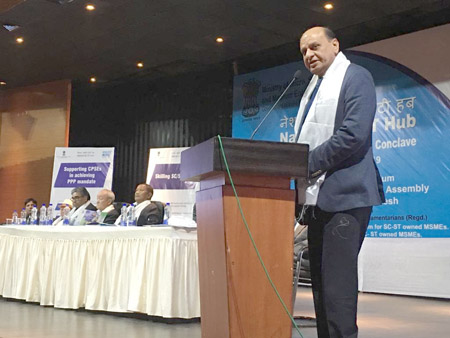 ITANAGAR, Feb 18: The National SC-ST Hub (NSSH) Conclave – an initiative of the union micro, small & medium enterprises ministry and the National Small Industries Corporation (NSIC) – held at the legislative assembly here on Monday saw officials providing information on various opportunities being provided by the government to Scheduled Caste (SC) and Scheduled Tribe (ST) entrepreneurs.
National Small Scale Industries Director (Marketing & Planning) P Uday Kumar in his address encouraged entrepreneurs, especially the aspiring and upcoming ones, to avail the government’s schemes.
“Take up entrepreneurship as your livelihood, so that you need not look for employment in government or public sectors,” he said. “We will provide the ecosystem; we will come to the rescue for all the support. Though there is no financing activity involved, we bring the banks to be open-minded about funding the entrepreneurs,” he said.
Kumar informed that about seven cost-saving schemes have been introduced for SC/ST entrepreneurs, and that the ministry provides about 30-40 percent of the cost of production, manufacturing and some service activities, for free.
“Products or services by SC/ST entrepreneurs will become cheaper than those of any other manufacturer by 30-40 percent if these schemes are availed properly,” he said.
Kumar also informed that the government provides training to SC/ST entrepreneurs “at any institute of choice in the country, the cost of which will be reimbursed.”
Food Processing Ministry Joint Secretary Ashok Kumar said the food processing industry is a sunrise industry, and advised SC/ST entrepreneurs to avail the benefits of the schemes under it.
“There is tremendous potential in food processing. A rough estimate shows that it will be an over 900 billion dollar market by 2020,” he said.
While IPR Minister Bamang Felix noted the importance of the conclave, he informed the food processing ministry’s joint secretary that the state government faces difficulties in implementing flagship programmes of the central government in the remote areas of the state.
“I request central government officials to see the ground reality before setting a uniform amount for implementation of schemes across the country,” he said.
Felix also pointed out the lack of viable market for the produces, and suggested to the central government officials to incorporate a buy-back policy for farmers and push their produces to the markets.
“When you send subsidy amounts to farmers, you need to incorporate a buy-back policy for farmers and push it to the markets to achieve your mission. Simply supporting growth of products is not enough. Rotating the produces in the jungles will not serve the purpose of the farmers here,” Felix said.
He expressed hope that the state’s industries department would take the mission to the nook and corner of the state, and gave assurance that the government would support the people in availing the schemes.
PWD Commissioner Bilatee Pertin noted that “there is endless potential in agriculture and horticulture activities,” but said “middleman, syndicates and brokers create artificial scarcity of stocks, resulting in fall of prices.”
He also pointed out the difficulties faced by farmers in exporting their produces due to artificial fluctuations in market prices created by brokers, and stressed on product marketing.
Pertin also pointed out that “there is a cascading impact on the environment due to cultivation and construction, such as the adverse effect on groundwater, resulting in deforestation of surrounding areas which encourage monoculture.”
He advocated looking for a compromise with nature, and suggested putting in place a mechanism to see that farmers and entrepreneurs earn, “but at the same time respect their existing ecosystem.”
Industries Commissioner GS Meena said the SCs and STs need to see the use of their reservation beyond employment opportunities and avail the benefits of such schemes, as well.
“The government has introduced several schemes and even exempted the Northeast region from the GST,” he said.
Meena stressed on farmers and growers to take the benefits of the food processing industry, and informed that the state government has requested the Centre to set up “logistic parks” in Itanagar and Pasighat for grading, packaging and transporting products.
Legislative Assembly Speaker TN Thongdok, NSIC (NE) Zonal General Manager Avinash Choudhary, National Working President of the Forum of SC ST Legislators and Parliamentarians Inder Iqbal Singh Atwal, Industries Director Habung Donyi, and Guwahati NSSH Branch Manager Peter Thawngneihchina pointed out the existing lacunae, and deliberated the way forward.
Presentations were made by various government departments, such as the KVIB, the MSME-DI, industries, textiles & handicrafts; public sector units PGCI, the FCI, Oil India, etc; and financial institutions such as the NABARD, the SBI, the SIDBI and the NEDFi.