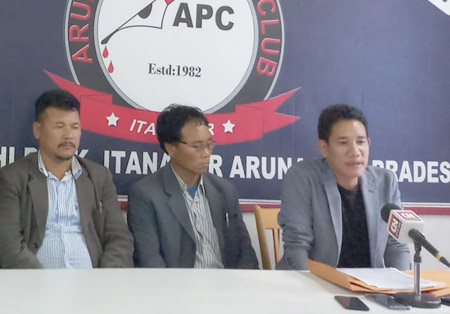 Staff Reporter
ITANAGAR, Mar 11: The family of Risso Tari has on Monday, submitted a five-point memorandum to the governor and appealed to him to initiate urgent steps to ensure early delivery of justice to the victim’s family.
Addressing reporters at the Arunachal Press Club here, Tari’s older brother, Risso Kiagung said that despite their appeal for urgent arrest of the police or paramilitary person who shot Tari and handing over the same to the victim’s family, no initiative was taken to address their demands.
“We have been instead, accused of politicizing the issue. But I want to make it clear once again that the victim’s family only seeks justice and will not withdraw our stand till justice is delivered. We do not want any compensation,” said Kiagung.
Further, citing the demands of the Risso Welfare Society (RWS), Kiagung said, “we seek immediate arrest of the personnel responsible for the death of Tari and handing over to the same to the victim’s family. We also demand suspension of district administration officers and termination of the service of deputy superintendent of police Make Bui, besides declaration of Risso Tari, Biki Ruja and Tsering Wangdi who died as ‘martyrs’ of anti-PRC protest.
He further refuted the incident report submitted by the deputy superintendent of police security cell, PHQ, Itanagar wherein it was mentioned that at around 1.30 hours of 23 February, some persons came with an ambulance and dropped a dead body near the civil secretariat gate. The body was reportedly taken to TRIHMS, Naharlagun and later identified as Risso Tari s/o Risso Taying.
“Tari had died at 11: 30 pm and not 1:30 pm as cited in the report,” claimed Kiagung, adding that the said report is questionable and accused the administration and state government of covering up the issue.
“The victim’s family only wants justice and has decided to desist from further agitation as bandh calls only affect the poor. We, however, will continue to press for our demands till justice is delivered,” he claimed.
The society also demands declaration of the burial ground as ‘martyr’s ground’, declaration of 22 February as holiday in honour of late Risso Tari and erection of statue of martyr Risso Tari.”