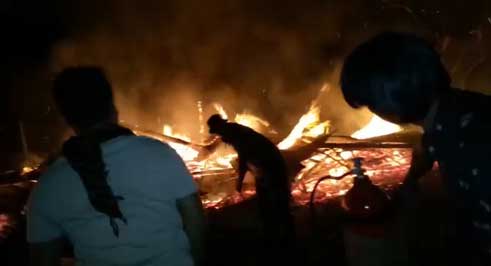 Staff Reporter
DEOMALI, Mar 27: Four houses were reportedly gutted in a fire accident that occurred here in Tirap district at around 6:30 pm on Tuesday.
Deomali SDPO Lod Tabio informed that the fire is believed to have been caused by an oil lamp (diya) in the room of one Sojol Das. All four houses had been rented out by late Wangcha Rajkumar’s widow.
On receiving information, a police team led by Tabio, along with personnel of the Indian Army’s artillery regiment and the CRPF, rushed to the spot and prevented the fire from spreading.
A fire tender was dispatched from Khonsa, 45 kilometres away. However, by the time it reached Deomali, the fire had been extinguished.
The SPDO ruled out the possibility of arson or foul play in the incident. Belongings, including cash amounting to lakhs of rupees, were also charred in the inferno, the SDPO said.