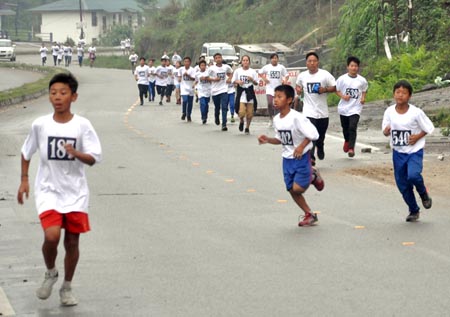 ITANAGAR, Mar 31: The capital complex administration on Sunday organized a half marathon to generate awareness among the public on the need to vote in a fair manner.
More than 200 runners from various parts of the state took part in the run from GHSS Chimpu to IG Park here.
Mudang Omo from Ziro, Lower Subansiri district, won the first position. He took 29.20 minutes to complete the race.
Habung Nyipa, also from Ziro, completed the race in 29.26 minutes to come second, and Bamo Tamang from Chimpu came third with a timing of 30.12 minutes.
In the women’s category, Yabang Tali from Siang district came first. She took 34 minutes and 50 seconds to complete the race.
Nedi Ngi and Chera Loku, both from Sangey Lhaden Sports Academy, came second and third with a timing of 38.43 minutes and 40 minutes, respectively.
The winners, runners-up and the third place finishers in both the categories were awarded cash prize of Rs 20,000, Rs 15,000 and Rs 10,000, respectively.
Consolation prize of Rs 1500 each was also given to the 4th to 10th place finishers in both the categories.
Capital Complex DC Himanshu Gupta, who flagged off the race under SVEEP, administered pledge to the participants to cast their votes in a fair manner. (DIPRO)