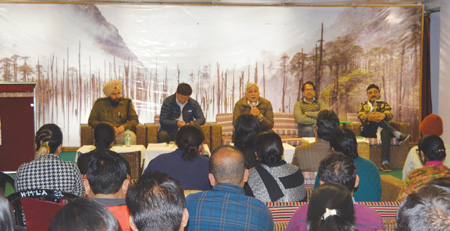 TAWANG, Apr 19: Union Housing & Urban Affairs (H&UA) Secretary DS Mishra urged the people of Tawang to keep their town clean as it would help attract more tourists to the district.
Mishra said this while interacting with beneficiaries of the PMAY and the IHHL schemes, at the urban development department’s circuit house here, during his visit to the district on Friday. Mishra was accompanied by Union H&UA Joint Secretary Kunal Kumar, Union Power Ministry’s Joint Secretary A Kumar, and state Housing & Urban Development Secretary SK Jain.
Tawang DC Sang Phuntsok informed that though tourists’ visits to the district have been increasing every year, “Tawang urgently needs a solid waste disposal management system and proper sewerage.”
Responding to the request to his ministry for setting up a sewerage system in Tawang, Mishra said a faecal sludge septic management system would be more appropriate.
“The government has been conducting surveys based on the garbage disposal of towns under the garbage disposal protocol, and star grading is given to the towns. This would also attract more tourists to your town,” he said.
Mishra also spoke about other schemes under his ministry, and asked the beneficiaries about the benefits and shortcomings in the schemes they have availed. (DIPRO)