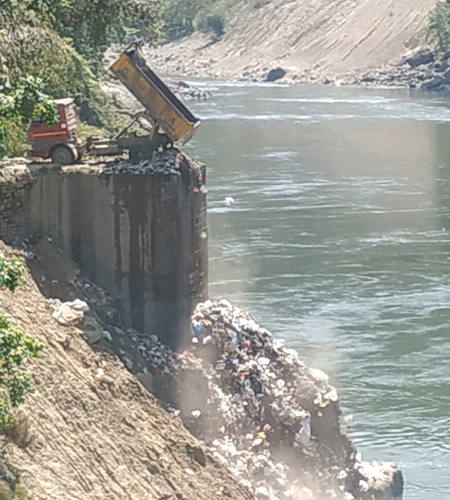 DC asks DUDA not to dump garbage in river

ITANAGAR, Apr 19: The East Kameng deputy commissioner on Thursday issued an order directing the district urban development agency (DUDA) to stop dumping garbage into the Kameng river here.
The DC issued the order under Section 144 of the Code of Criminal Procedure, asking the agency to stop the practice “with immediate effect.”
“An FIR will be lodged without any further notice if the order is not complied with,” the order reads.
The administration has issued the order, taking cognizance of a complaint submitted by the Youth Mission for Clean River – Arunachal Pradesh (YMfCR-AP).
“It is ridiculous that the UD department, which is a stakeholder and the implementing agency of the Swachh Bharat Mission (SBM), is dumping all the garbage and waste into the Kameng river, which is the biggest threat to the cleanliness of the river and its aquatic life,” YMfCR-AP chairman SD Loda wrote in the complaint.
“The DUDA has been collecting garbage from door to door ever since the start of the SBM and dumping them into the Kameng,” Prem Taba, a research scholar at Rajiv Gandhi University, said.
The dumping is being done near the Nicham Sonam bridge here.
Taba, who is also a member of the YMfCR-AP, said, “The DUDA is implementing the SBM, which was received very well by the people in Seppa, as they realized the importance of cleanliness and hygiene. However, the agency did not know how to dispose of the waste. When we contacted them last year, they said they did not have a waste treatment plant or landfill to dispose of the waste.”
He said the DUDA’s staff collect the garbage in the morning, put it on their truck, and then go and dump it in the Kameng.
“Sometimes, they burn it,” he added.
“It is painful to watch the waste being dumped in the Kameng river, which once used to be a very clean river,” Taba said, adding, “We used to drink from it and use its water to cook. But since the start of the SBM, a vast stretch of the river has been filled with floating plastic bottles and other types of waste.”