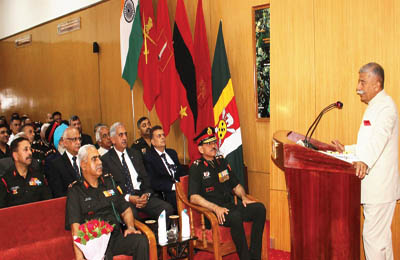 WELLINGTON, Apr 27: “Create bonhomie with the civilian population, wherever you are posted, particularly when deployed at international borders,” advised Arunachal Pradesh Governor BD Mishra, addressing the battalion commanders of the Madras Regiment and station officers of the Madras Regimental Centre here in Tamil Nadu on Saturday.
The governor, who was here to attend the regiment’s 33rd biennial battalion commanders’ conference, exhorted the battalion commanders to emulate the guidelines of Field Marshal Philip Walhouse Chetwode, which is housed in the Indian Military Academy in Dehradun: ‘Nation first, troops next, and self last.’
Stating that today’s battalion commanders are “well-trained, well-motivated and well-guided to excel in earning a good name for their battalions and regiments,” Mishra advised them to be “cent percent concerned about their good actions and inputs, but be detached about the result gaining.”
Lt Gen Rajeev Chopra, Maj Gen Virendra Singh, Maj Gen Manjinder, Brig SK Sangwan and battalion commanders, along with veterans and officers of the regiment were also present on the occasion.
Earlier in the day, the governor, accompanied by his wife Neelam Misra, laid a wreath at the war memorial of the Madras Regimental Centre. (Raj Bhavan)