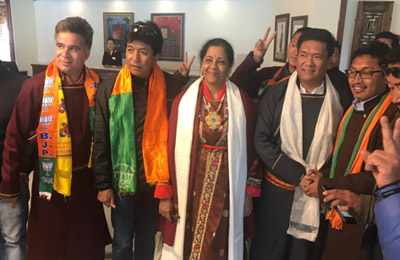 LEH, May 4: Arunachal Pradesh Chief Minister Pema Khandu along with Defence Minister Nirmala Sitharaman visited here in Jammu & Kashmir on Saturday to campaign for BJP candidate Jamyang Tsering Namgyal.
In his speech, the CM spoke of the similarities between the lives of the people living in the Himalayan region, and of the cultural similarities between Ladakh and his home district Tawang, which is the birthplace of the 6th Dalai Lama.
The CM said he would “support the genuine demands of the people of Ladakh with all the MPs of the Northeast.”
He informed the people of the work done by the Narendra Modi government in Arunachal and other northeastern states, and said the BJP, if it is voted back to power, would bring similar development in Leh and Kargil. (CMO)