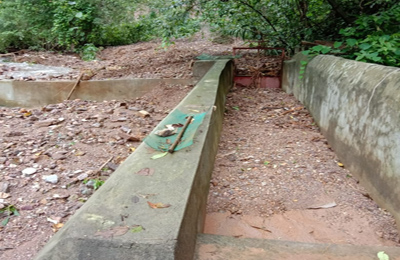 Staff Reporter
DAMBUK, May 19: Reckless dumping of muck by the road construction firm, Bhartia Infra Projects Limited (BIPL), has allegedly caused major damage to the headwork of the drip-cum-micro-irrigation channel on the Mekong river here in Lower Dibang Valley district.
Angry over the situation, the affected villagers have written to the deputy commissioner, apprising her of the issue.
In their representation to the DC, the villagers said the project manager and engineers of the BIPL, which is constructing the approach road from Dambuk to Sissiri bridge along the new NH 13 (part of the Trans-Arunachal Highway in eastern Arunachal), had been apprised of probable damage to the headwork of the irrigation channel if muck dumping was carried out in the upper stream of the river.
They said the firm had been apprised of this well in advance, on 29 November last year, much prior to the start of the earth-cutting work, in writing as well as verbally.
However, they said, the executing agency turned a deaf ear to their repeated pleas “and recklessly dumped the muck/debris of the earth-cutting work in the said river, thereby violating the laid down guidelines given by the government to maintain soil and water conservation during the construction work.”
They also alleged that no prior notification of dumping had been issued to the affected farmers in the Mekong river area.
The dumping in the river has caused siltation and extensively damaged the headwork of the irrigation channel, resulting in diversion of the river water and drying up of the headwork and the irrigation channel, as a result of which the affected farmers are not able to cultivate their WRC fields till date, despite the cropping season, the villagers claimed.
They expressed fear that if the silt is not cleared on time, they would not able to cultivate their fields on which their families depend for food.
They also expressed fear that if the river water increases, their WRC fields would be inundated by the siltation caused by the dumping, and that the GI pipes used for drawing water from the irrigation project would get rusted and be damaged if no water flows through them.
The drip-irrigation project, which was constructed last year through government funding, will cover about 32 hectares of orange orchards in the KS Motam area, on extension of the project, as the orange plants get dried up during the dry winter season.
These orchards are the only source of income for many poor farmers of Dambuk, the letter stated.
The water from the micro-irrigation channel is also used for drinking by the labourers and the cattle engaged in farming, it said, adding that the river water has also become muddy and undrinkable because of the dumping.
The affected villagers have requested the district administration, the executing agency, NHIDCL, and the contractor, BIPL, to clear the silting caused by reckless muck dumping, and to restore the damaged headwork and irrigation channel at the earliest.
“We have requested the administration and the executing agency to start the restoration work within seven days of receiving of our letter. If no action is taken within the given timeframe, we will be left with no other option but to take the matter to the high court, though we do not wish to hinder the road construction work,” the affected villagers said.