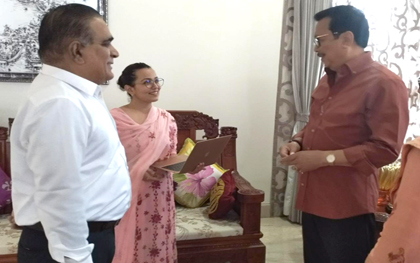 NAMSAI, May 20: Advisor to the union micro, small & medium enterprises (MSME) development commissioner, AK Mudgal, called on Deputy Chief Minister Chowna Mein here on Monday to discuss the development of ‘agri-clusters’ in Namsai district and the state to elevate the average income of farmers up to Rs 1,00,000 per annum.
Mudgal, who was accompanied by Bhopal-based Nisarg Agrotech CEO Nidhi Chaturvedi, said “the core vision of the agri-cluster development is to elevate the average income of farmers of the district and to develop a strong agro-based value chain in the state.”
For this, he said, three clusters have been proposed to be established in two phases in Namsai district.
Highlighting the project, Mudgal informed that Phase 1 of the agri-cluster development, which is already underway, involves cultivation of 100 acres of aloe vera in Namsai district.
“Along with assured buyback for the aloe vera crop, the unique feature of this cluster will be the free distribution of moringa seeds for farmers by Nisarg Agrotech, besides the establishment of processing units for cattle feed and aloe vera gel extraction,” he said.
He informed that moringa seeds would be planted at the peripheries of the fields, and would provide a continuous supply of protein-rich food source to the farmers, while its leaves would be utilized for producing cattle feed.
“Phase 2 of agri-cluster development will involve development of two agri-clusters: one based on turmeric and the second on moringa,” said Mudgal.
He said these agri-clusters will be developed under the MSME’s Kalptaru scheme for agri-cluster development.
“These clusters will involve cultivation, primary, secondary and tertiary processing of both moringa and turmeric crops. A whole value addition chain will be developed in the district, enabling a robust agro-processing infrastructure,” he said.
The agri-clusters are expected to cater to and cover 1,500 farmers of the state, and aims to raise their average income through assured buyback.