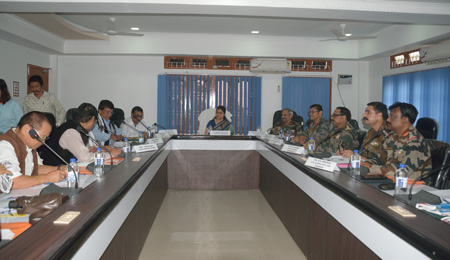 ITANAGAR, May 22: NCC North East Region Additional Director General, Major General Bipin Bakshi visited the state capital on Wednesday to participate in the state advisory committee meeting, held at the Directorate of Higher and Technical Education, to discuss expansion plans of the NCC in the state.
Chairing the meet, state’s Secretary Education, Dr Madhu Rani Teotia deliberated on all major issues and reiterated her commitment to have the NCC footprints in all the education institutes of the state at the earliest.
Discussions included identification of land for an NCC academy, provision of ministerial staff to NCC units, incentive to NCC cadets and NCC officers, construction of obstacle courses in colleges, NCC as an elective subject in schools and universities, special provision of exam for NCC absentees and fund allocation for the NCC.
In response, the ADG reiterated the army’s commitment to spread the reach of NCC to the remotest of areas of the state to encourage and help youth build character, discipline and explore the numerous advantage of NCC.
The Education secretary also assured full cooperation to the NCC units by the state government for betterment of the NCC in the state.
The ADG also discussed about building an NCC academy in the state to provide the student all the training and administrative facilities at one place. The institute, he informed, will include firing range, sport fields, auditorium, drill ground etc.
The issue of giving suitable incentives and recognition to the NCC cadets by the state government was also discussed.
Later, the ADG also visited the 1st AP BN at Naharlagun and shared the latest information with the staff and NCC officers of the college and schools.