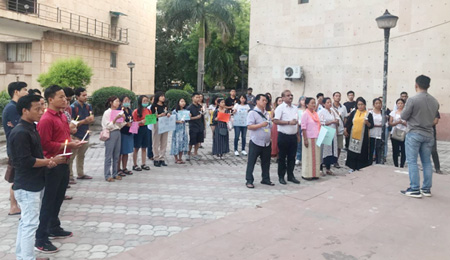 NEW DELHI, May 23: The Tirap Changlang Longding Society Delhi, under the banner of the Arunachal Students’ Union Delhi, organized a ‘prayer meet and candlelight vigil’ at Arunachal House here on Thursday to express solidarity with the families of those – including MLA Tirong Aboh – who lost their lives in the recent barbaric attack in Tirap, and for peace of the departed souls.
Condemning the “gruesome and horrific incident,” Arunachal Bhawan DRC (Accommodation) Sangeet Dubey spoke about the “open-heartedness and enthusiastic nature of late MLA Tirong Aboh.”
DRC (Transportation) Marto Bagra also expressed condolences to the bereaved families.
Delhi Civic Centre Income Tax Assistant Commissioner Chazat Lowang condemned the massacre, and questioned the meaning of “democracy and its trait of a free and fair election.”
The importance of unity and raising voices together against injustice was highlighted by student Pankai Chingsaham.
Many other students from Arunachal studying in Delhi also spoke and urged everyone to raise their voices “till they are heard it in the prime minister’s office and the union home ministry.”