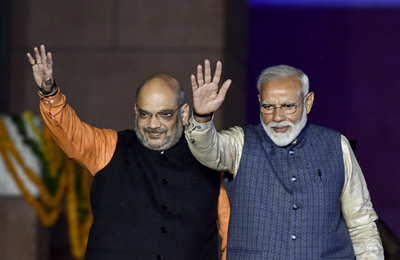 NEW DELHI, May 23: Prime Minister Narendra Modi on Thursday led his Bharatiya Janata Party (BJP) to a super-sized victory for a second term in office, as his message of nationalism, security, Hindu pride and a New India was wholeheartedly embraced by voters across large swathes of the country.
With the elections establishing the 68-year-old Modi as the most popular leader in decades, the partial vote count released by the Election Commission of India (ECI) showed that the BJP will not only surpass its 2014 performance but also cross the 300-seats mark in the 543-member Lok Sabha.
Until 9 pm, the BJP had won 115 seats and was leading in 188 of the 542 Lok Sabha seats that went to polls in seven phases in April and May. This has put it on course to likely winning 303 seats, far better than the 282 it won in 2014. With the support of allies in the National Democratic Alliance, the coalition could have some 344 seats.
The victory margin left the combined opposition in the dust, with the Congress party stuck at 27 confirmed victories and a lead in 24 seats, according to the partial results.
Such was the force of the BJP wave that even Congress president Rahul Gandhi lost in his bastion of Amethi to Smriti Irani, but in consolation prize won the Wayanad seat in Kerala. The euphoria of the victory was capped by a sombre speech by Modi, in which he promised to devote “every moment of my life and every fibre of my body” to the welfare of the nation. He also vowed that he would never do anything with ill-intention, nor would he do anything to enrich himself.
Modi easily won his seat in Varanasi with a margin of over 4.5 lakh votes, while party president Amit Shah took Gandhinagar in their home state of Gujarat by over 5.5 lakh votes.
The results have raised questions about Gandhi’s leadership and his party’s future. At a press conference, Gandhi refused to address that issue, saying the party will hold a meeting on Friday to discuss the future.
“The people of India have decided that Narendra Modi will be the PM again, and I fully respect it,” Gandhi told reporters.
He also congratulated Modi and the BJP, adding that today was not the day to look into the cause of the defeat but to respect the will of the people. (PTI)