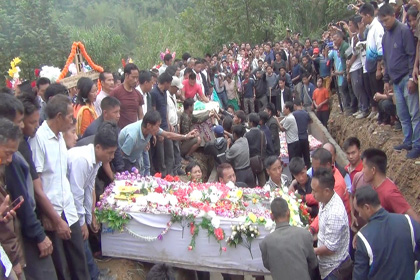 DADAM, May 24: The mortal remains of slain MLA Tirong Aboh were laid to rest with full state honours at his hometown Dadam in Tirap district on Friday.
The mortal remains of the 10 others who had died along with Aboh were also laid to rest in different places.
Aboh along with 10 others, including his son, was assassinated by suspected NSCN militants, two days prior to the declaration of the election results. The Arunachal Pradesh government had declared a one-day state mourning, with the national flag flying at half mast on Friday.
A ceremonial gun salute was presented during the funeral by the Arunachal Pradesh Police.
Besides Aboh, the mortal remains of his son Along Aboh, PSO Poanhang Agi, Tangro Atoa, Jalin Hakhun, Wangngoi Hakhun, Wangngo Hakhun, Gamwang Hakhun and Matlam Aboh were laid to rest at Dadam. The mortal remains of Patwang Sumpa and head constable Siksa were laid at Huakan village and Upper Kolam village, respectively.
Thousands of people from all walks of life made their way to Dadam to pay their final respects to Aboh during his funeral.
Tirap Deputy Commissioner PN Thungon laid a wreath on the mortal remains of Aboh, on behalf of Governor BD Mishra.
The commanding officers of the 36Bn CRPF and the 16 Assam Rifles, along with the Dadam CO, chiefs, GBs and public leaders from different parts of Dadam also paid their last respects to Aboh.
Aboh was first elected as MLA from the Khonsa West assembly constituency on a PPA ticket in 2014. Later, he joined the INC, and had been inducted as a cabinet minister in the Nabam Tuki government.
He retained the Khonsa West seat on an NPP ticket, defeating his rival, BJP candidate Phawang Lowang, by 1055 votes in the just-concluded general election. (DIPRO)