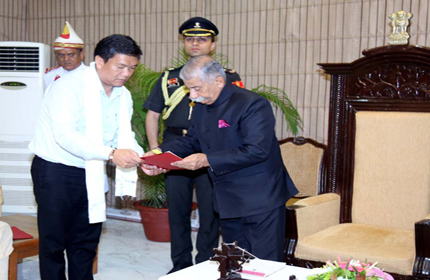 ITANAGAR, May 26: The sixth state legislative assembly was dissolved with Chief Minister Pema Khandu tendering his resignation, along with those of his council of ministers, to Governor BD Mishra at the Raj Bhavan here on 26 May.
The governor accepted the resignation and signed the order dissolving the sixth state assembly with immediate effect. He requested Khandu and his council of ministers to continue till the new government is sworn in.
Earlier, the state cabinet headed by Khandu held its last meeting, and observed two minutes’ silence to mourn the untimely death of Tirong Aboh and 10 others in an ambush in Tirap district.
The cabinet remembered Aboh for his services to the people, and strongly condemned the dastardly act which claimed 11 lives.
Mourning the deaths, the cabinet expressed its solidarity with the bereaved families. (Raj Bhavan, CMO)