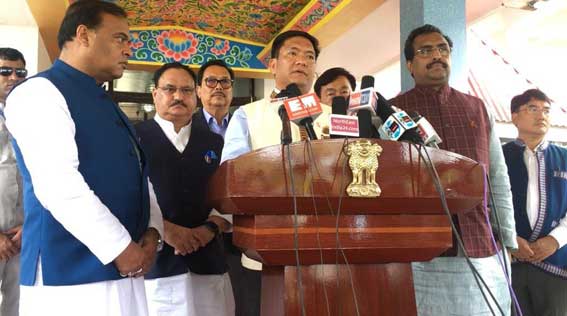 ITANAGAR, May 27: The swearing in of the new chief minister is scheduled for 29 May at the DK convention hall here as Pema Khandu staked claim to form the government on Monday.
The venue for the swearing-in ceremony is a departure from the norm of such events taking place at the Raj Bhavan.
Addressing reporters after meeting with Governor BD Mishra, Union Health & Family Welfare Minister JP Nadda informed that Khandu was reelected unanimously as the leader of the Arunachal Pradesh assembly after being nominated by Deputy Chief Minister Chowna Mein during the BJP legislature meeting at the state banquet hall earlier in the day.
All 41 newly-elected members of the legislative assembly were present at the party’s legislature meet.
“We came here (Raj Bhavan) and handed over the support letter to Governor BD Mishra. He has also given us a letter, giving the invitation to Khandu to come and form the government,” Nadda said.
Speaking on the BJP’s victory in the state, Khandu said this is the first time in the history of Arunachal that the party is going to form a full-fledged government.
“The people have responded to the work done by Prime Minister Narendra Modi in the last five years and made the lotus bloom,” he said, and thanked the people of the state for the resounding victories the BJP achieved in the simultaneous parliamentary and assembly elections.
“I have also called on our MLAs to gear up as the real challenge still remains. People have a lot of expectations from us, and we are confident that we will take the state to newer heights of development in the days to come,” Khandu said.
Top BJP leaders, including North East Democratic Alliance coordinator Himanta Biswa Sarma, the BJP’s general secretary in charge of the Northeast Ram Madhav, and newly-elected MP Tapir Gao also met with the governor.