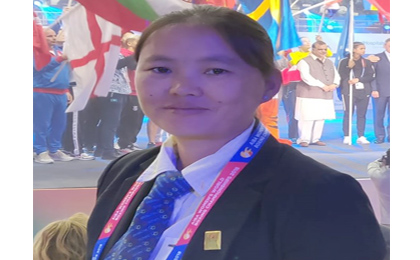 ITANAGAR, May 29: Arunachal Olympic Association (AOA)’s Joint Secretary Minu Tadang has been selected to represent the country in the 59th International Session for Young Participants (ISYP) to be held in Ancient Olympia, Greece from 1 to 15 June.
Tadang is the second person from India to be invited by International Olympic Committee (IOC) to represent the country in the said programme, informed AOA in a release.
The two-week IYPS is run by the International Olympic Association (IOA) and is designed as an introduction to Olympism and the Olympic movement.
The session brings together a large international group of young people, Olympians and people active in sport.
The aim of the IOA is to educate and motivate young people to use their experiences and knowledge gained from the session to proactively promote the Olympic ideals and educate others in their own countries.