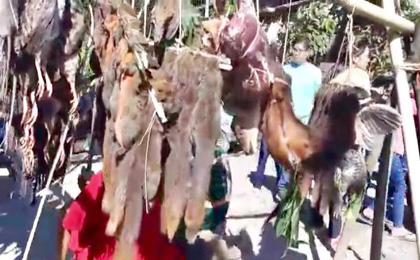 In a recent video which went viral in social media, a mind boggling number of wild animals and birds were killed and hung on display, probably for some kind of local ritual or something. Seemingly hundreds of squirrels, many jungle fouls, birds, wild boars, deer’s, flying squirrels, civet were visible in the video. “Massacre” would be a proper term for the killing; hunting would be just too soft a word to describe it.
When the news of the incident reached to the forest department, they quickly flung into action and necessary directives were issued to the forest officials of the concerned place to arrest the culprit(s) and book them under appropriate sections of law within the shortest possible time period.
This however, is not an isolated or rare incident, though usually in a much lower scale. Hunting was and is still a common practice in a tribal society of our state, which have been practiced since the time immemorial. The only difference being today we don’t hunt for the sake of our survival unlike our forefathers did, but for fun and for other selfish reasons.
No doubt that this incident have brought free for all criticism to the forest department, but there are many factors/constraints that need to be understood and addressed to save the remaining wildlife of our state. People must understand that saving environment and forest/wildlife is a collective responsibility, as after all everyone’s survival depends on it. Many are unaware of the fact that forest department is running with shortage of staff, especially the field staff. Ratio of field staff (Range Forest Officer, Dy. RFO, Forester, Forest Guard etc.) with that of the total geographical area of the forest cover is not at all sufficient for an efficient management of the forest.
Covering and checking illegal activities in such a vast area with just a few field staff is practically impossible. The problem is also increased many folds by the tough hilly terrains of this region.
Hunting was sustainable in our tribal society until modern guns were introduced in our state. Guns no doubt are more accurate and efficient than the previous traditional bows and arrows. The massacre that was seen in the video wouldn’t have been possible without the hunters having guns.
In today’s time almost every household has a gun, mostly in villages, and it is widely used in hunting expeditions on a daily basis. Obtaining one or more guns is comparatively easy in our state, getting ammunition is even easier. In one hand we are selling guns on a crazy rate and on the other hand we expect the wild animals not to be hunted down. This makes no sense. Either stop selling guns or save wild animals. The two cannot go hand in hand, at least not in this tribal state where hunting was and still is a part of tradition.
Some wildlife based NGO should take an initiative to file a PIL for blanket ban on sale of guns and ammunitions in entire Northeast. They are hardly used for the purpose it actually meant for, i.e. self-defence; instead it is used solely for hunting purpose.
If self-defence is the main purpose for having guns, pistols and revolvers will prove to be more useful. So, instead of guns, only pistols should be issued to the public. If guns are banned in our tribal state, 80% of the problem of hunting/ poaching of wild animals and birds will be eradicated (the remaining 20% of the threat being faced by wild animals being deforestation and habitat destruction etc).
One of the most critical point that we often miss in conservation process is the role of local people. Their role is so critical that without their active participation every effort to save wildlife in our tribal state will be futile.
In most part of our state, each clan traditionally has their own patch of forest and its resources under their jurisdiction. They are known to fiercely defend it from the neighbouring clans or other outsiders against trespassing or abuse, by imposing heavy penalties on wrong doers. Since many of them are educated now, they form conservation committees/organizations and seek forest official’s help in conservation of forest under their jurisdiction.
From my experience, I can say that such local organizations/ protection squads are much more efficient in detecting and deterring illegal activities related to forest and wildlife than the forest officials, for they have better knowledge of the forest under their jurisdiction and also about the habitual offenders. Their expertise and willingness to conserve their forest and its resource should be properly recognized and encouraged by the forest department in the form of incentives like jobs, legal recognition of their organization, awareness campaign, free distribution of solar lamp, torch light, hunting boots etc.
Every village under every Forest Range should be encouraged to have their own local forest and wildlife conservation committee and be provided with legal and financial resources.
Unless such drastic measures are not taken immediately, wild animals will be confined only to the zoos in near future. (The contributor is Range Forest Officer, Sagalee Forest Range)