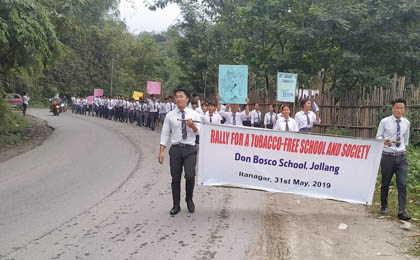 ITANAGAR, May 31: Arunachal Pradesh joined the rest of the world in observing the World No Tobacco Day, an initiative of the World Health Organization (WHO) to generate public awareness on the harmful effects of tobacco use and to discourage the use of tobacco in any form.
The day is celebrated every year on 31 May, and the focus of this year’s celebration was on tobacco and lung health.
As part of the celebration, awareness rallies and meetings were organized by the district tobacco control cells in the district headquarters, and at various health centres and educational institutions, to raise awareness on the ill-effects of tobacco consumption on the user’s body.
Awareness rallies were organized in Tawang, Yingkiong (Upper Siang), Khonsa (Tirap), Pasighat, Ruksin, Bilat, Rani, Yagrung, Mebo and Namsing in East Siang, Aalo (West Siang), Bomdila (West Kameng), Dambuk (Lower Dibang Valley) and Daporijo (Upper Subansiri).
Health officials, including from the National Tobacco Control Programme, highlighted the Cigarettes and Other Tobacco Products (Prohibition of Advertisement and Regulation of Trade and Commerce, Production, Supply and Distribution) Act, 2003.
They informed the public about the free medication and treatment provided by the government at tobacco cessation centres for people who want to quit tobacco.
Another highlight of the day was the taking of the ‘no tobacco pledge’ by participants.
Meanwhile, the Tawang monastery campus was declared a ‘tobacco-free zone’ on the occasion. It was officially declared by DMO Dr Wangdi Lama.
The students and staff of Don Bosco School in Jollang near here also took out a rally to spread awareness on the ill-effects of tobacco use in any form.
The Brahma Kumaris in Namsai organized a special drug de-addiction camp on the occasion of World No Tobacco Day.
Members of the public, students, shopkeepers and CRPF jawans also participated in the programme. (With DIPRO inputs)