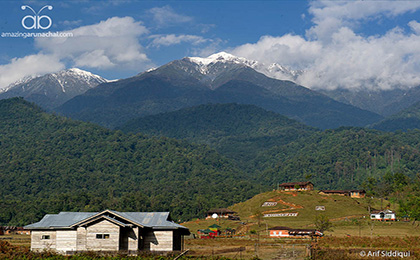 Arunachal Pradesh has hilly land and dense forests. Because of the state’s unfavourable physiography, several of its administrative areas are still very backward in terms of availability of modern facilities. Even after many years of independence, many administrative circles of the state are lacking in proper motorable roads, electricity, telephone connectivity, and such.
One such place is Vijaynagar.
Located on the northeastern part of Miao subdivision in Changlang district, Vijaynagar is one of the most remote administrative circles, and is still cut off from the rest of the country as there is no road to connect it to the rest of the state.
Vijaynagar shares international boundaries with Myanmar on three sides. It is only 157 kms away from Miao; yet, because of lack of road communication and other modern facilities, the people of Vijaynagar are still living a very simple life.
The only way to reach Vijaynagar is on foot, and it takes seven to 10 days to reach it from Miao, the nearest administrative town. The journey is not easy as one has to cross deep jungles, canals and streams, carry one’s own belongings, and sleep in the jungles. There is the fear of wild animals, poisonous snakes and insects, the fear of dehydration, and chances of getting ill, body cramps and dislocation because of the slippery and muddy route. One has to trek through the Namdapha National Park, and it’s a painful, tiresome journey.
The only other mode is helicopter services. Private helicopter service is provided from Naharlagun. Besides that, the Assam Rifles (AR) and the Indian Air Force (IAF) also send their helicopters from time to time.

Brief history
After independence, the demarcation of the boundary between India and Myanmar was immediately required. However, the eastern extremity of the then NEFA was not known to the whole country. Hence an expedition was mounted by the 7th AR in June 1960 from Miao. However, it was unsuccessful.
In February 1961, another expedition was launched by the 7th AR, under the leadership of Major Sumeer Singh. It could only reach Gandhigram – 22 kms short of Vijaynagar. Finally, in October 1961, another expedition, led by Major General AS Gaurya, reached Chankan Pass, and, later, Vijaynagar. The Indian tri-colour was hoisted there on 27 November, 1961.
Since then the security of the area is looked after by the AR.

People and culture
Vijaynagar is home to the Yobin tribe and Gorkha ex-servicemen of the Assam Rifles. The Yobins are the indigenous inhabitants of the area, and the ex-servicemen were settled there by the central government to strategically dominate Vijaynagar area as it was a no man’s land.
Vijaynagar is a peaceful area. In fact, few complaints are registered at the Vijaynagar police station in any year.
Among the community of ex-Assam Rifles servicemen, the majority are Gorkha. However, a few Mizo families also reside there. In fact, the president of the Ex-Servicemen Association, Assam Rifles, Vijaynagar, is an 80-year-old Mizo gentleman, Zachneng Ralte, himself an ex-serviceman.
When I interacted with Ralte, he stated that he came to Vijaynagar in 1969.
“The ex-servicemen of the AR were sent by the higher authorities in batches,” he said. “The first batch came to Vijaynagar in 1967, the second in 1968, and the third in 1969.
“Altogether 200 families of ex-servicemen of the AR were sent to Vijaynagar to settle there by the authority,” Ralte said.
He told me that during the initial year, some cash, agricultural tools like spades and daos, and crops and cattle were provided to them. He said although life in Vijaynagar is peaceful, lack of communication make things uncertain. The people have been waiting for a motorable road for decades, and they are still waiting.
Ralte said he would shift to Aizawl, Mizoram, where he has his ancestral house, if Vijaynagar does not get a motorable road in two to three years, as age is catching up on him. He said he would return to Vijaynagar only after a motorable road is laid.
The Yobins have adopted Christianity. They remain close to nature and meet the daily necessities of life through agriculture produces. They reside in villages like Chidudi, Gandhigram, Si Dikhu and Hazolo. They are experts in treating joint pains, neural problems, etc, using special herbs brought from the deep jungles.

Problems of Vijaynagar
Besides the absence of a motorable road, Vijaynagar also has no telephone network, no vehicle service, no proper shop or electricity. In fact, the area is lacking in any kind of modern facility.
The nearest town from Vijaynagar is Miao, and the people must trek in between the two places. They have to carry their articles along with them to Vijaynagar. On their way, they sleep under temporary sheds in the jungles, or on the ground.
As every commodity has to be carried as head-load, the people hire either local people or Chakma porters who are experts in carrying head-loads. It is learnt that a porter charges Rs 150 for every kg of head-load. Hence, the prices of commodities go sky high once they reach Vijaynagar. One packet of salt costs Rs 250 in Vijaynagar, one cement bag costs Rs 7,000, 1 kg of sugar costs Rs 200, and almost every commodity is charged thrice its maximum retail price.
A graduate Yobin student, Yofuna Yobin, lamented that though there is a government school in Vijaynagar, the school is running without proper attendance of teachers. Because it is a far-flung area, teachers are unwilling to stay there. The school does not have basic facilities.
Yofuna said Class 10 students have to trek for nine days from Vijaynagar to Miao to appear for the CBSE exams. After reaching Miao, financial constraints and lodging problems take a toll on them.
A villager from Maj Gaon, Vijaynagar, said they have to walk long distances to get information and convey news as there is no mobile network and provision of transportation. To contact with the people outside, the people of Vijaynagar still use PCOs, which charge Rs 3 per minute.
Helicopter sorties are not available every day, and the people often request for ration sorties from the IAF or the AR.
There are no proper medical facilities, and the people often visit the AR for medical check-up. It’s difficult to evacuate patients in emergency cases for further treatment.
“However, we sometimes arrange sorties in case of emergency,” the AR’s A Coy commandant, Major Thomsong, told me.

Positive sign
Vijaynagar is very important for India because of its strategic location. As India has adopted the Look East Policy, Vijaynagar is very important because of its proximity to Myanmar. India needs Vijaynagar to counter China’s influence in Myanmar and nearby border areas.
Miao Horticulture Development Officer L Tangha said the climate of Vijaynagar is ideal for horticulture crops like lemon, orange, kiwi, cardoons, etc. Cereal vegetables like potato, cabbage, etc, along with tea, can also be cultivated.
Miao, Jairampur and Nampong are the nearest towns from Vijaynagar. It can be developed into a tourist circuit. In fact, the Miao-Vijaynagar road passes through the Namdapha National Park, and this can improve the flow of tourists interested in adventure activities like trekking, river rafting, bird and butterfly observation, etc. Rural tourism and cultural tourism also have huge potentiality, only if the road communication is developed.
“My department is committed to make the Miao-Vijaynagar road motorable by 2019,” said RWD EE N Rike. He said the road has been laid upto the 37th mile.
When I discussed this with local MLA Kamlung Mosang, he said, “I have directed all the departments to ensure all-round development of Vijaynagar. Because of my initiative, the Vijaynagar CO office has been upgraded to EAC office. I am committed to work for all-round development of the region.”

Conclusion
Though Vijaynagar is a landlocked area, it is strategically very important to India, in terms of the nation’s security. It is also a powerhouse in terms of establishing a flora and fauna reservation there. In the coming days, it can be developed into a major tourist hotspot. (The contributor is SDPO, Miao. The Vijaynagar police station comes under his jurisdiction, and he often travels there on duty.)