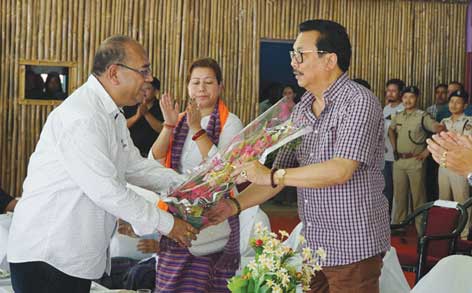 NAMSAI, Jun 6: Deputy Chief Minister Chowna Mein said the topmost priority of the state government would be to speed up the development process, and vowed to continue working for the state with more vigour and dedication.
“The focus is to ensure all-round development and work as one by ensuring seamless integration,” said Mein during a meeting here on Thursday.
He said he along with the MLAs of Namsai and Lekang would work together to bring reforms and work for the development of Namsai district “to take it to newer heights and make it a model district.”
Praising Prime Minister Narendra Modi’s and Chief Minister Pema Khandu’s initiatives for development, Mein said the government’s efforts would also be to ensure transparency, adding that the integrated Chief Minister Dashboard has been set up to enable monitoring of developmental works by the chief minister’s office.
Referring to skill upgrading and education as priority areas, the DCM said the government would focus its attention on the development of these two areas.
Namsai MLA Chau Zingnu Namchoom and Lekang MLA Jummum Ete Deori also spoke.
The DCM has convened a meeting on Friday with the HoDs of Namsai district to learn about the status of and discuss issues related to the aspirational district under the ‘transformation of aspirational districts’ programme.