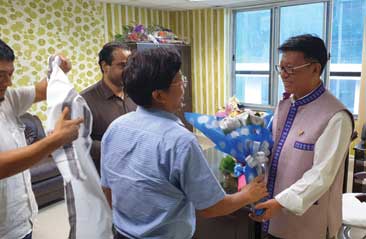 ITANAGAR, Jun 6: Education, Cultural Affairs and Indigenous Affairs Minister Taba Tedir on Thursday assumed charge of the ministries assigned to him, and held several rounds of meetings with the top officials of the departments concerned.
During the meetings with officers of the art & culture, gazetteers, library, research, and education departments, Tedir gathered information about various issues facing the departments.
Later, speaking to the media, Tedir said being given the responsibility of serving as a minister was a challenge he was ready to take on.
“I shall leave no stone unturned to complete the works assigned by Chief Minister Pema Khandu. Also, the development of my constituency will be my top priority,” he said.
The minister said he will be meeting all the officers of the departments assigned to him to get a better idea of the issues concerning them.
“Officials have briefed me on the activities of the departments. I have assured them of my support and sought their cooperation in carrying out projects and schemes for the progress of the state and the welfare of the people,” the minister said.
He said he would push hard for restarting the Trans-Arunachal Highway project in his constituency, Yachuli, in Lower Subansiri district.
Meanwhile, executive members of the Indigenous Faith and Cultural Society of Arunachal Pradesh, led by its president Tajom Tasong, vice president Tayum Tok, and secretary Bai Taba met the minister at his office.