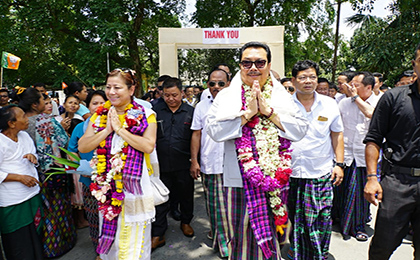 CHONGKHAM, Jun 7: Deputy Chief Minister Chowna Mein on Friday said the state government will accord priority to the development of border areas in order to prevent migration of people to the urban areas.
Mein, who returned here in Namsai district to a rousing public reception after assuming the office of the DCM for a second stint, said “border area challenges are many, but the new ‘Team Arunachal’ will take the responsibility and work for the progress of the state.”
He said lack of basic amenities and access to roads are the factors behind the migration to urban areas, adding that there are also challenges in the health and education sectors which require reforms.
“The district hospitals need to be modernized and specialist doctors are required in the hospitals,” the DCM said.
He said the ministers will be given charges of different districts to oversee the developmental activities, and that “action will be initiated against non-performing ministers.”
The DCM also said modernizing the police department and procuring modern equipment are some of the priority areas of the government.
Responding to several public memorandums, Mein assured to consider the demands on priority.
With regard to the demand of the locals here for upgrading the EAC office to ADC headquarters, the DCM opined that infrastructure development should be taken up first.
He meanwhile said the cremation ground in Chongkham would be developed.
Lekang MLA Jummum Ete Deori, who accompanied Mein, also spoke.
Among others, former MLA CT Mein, Khamti chief Chow Khanseing Namchoom, Chongkham chief Chow Miling Namchoom, BJP workers, government officials, and members of NGOs were present on the occasion. (DCMO)