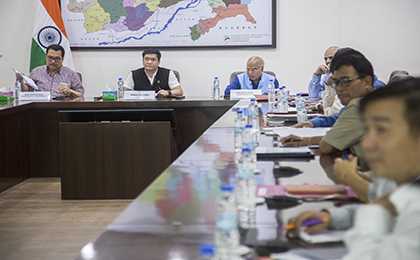 ITANAGAR, Jun 8: Stating that “individually motivated projects and schemes are the windows of corruption,” Chief Minister Pema Khandu advocated discouraging such project proposals.
The chief minister, who chaired a meeting of the finance, planning & investment department here on Saturday to discuss the preparation of the budget for the upcoming financial year, said it was decided during the recent cabinet meeting that all schemes and projects must be proposed through proper procedure and reflected in the budget.
“Also, individually motivated projects prepared under the SADA and the SIDF schemes have been stopped,” he said.
“Such steps will bring greater transparency in the entire project implementation process, and lessen unnecessary harassment to government employees and public leaders on account of such individual schemes,” said the chief minister.
He also said inclusion of new proposals must be discouraged at the revised estimate stage and only the budgeted projects that require additional funding may be considered.
Terming the finance, planning & investment department “the main engine of the government,” Khandu urged the department to focus on computerization of the treasury office.
He also urged the budget division to focus on payments through the PFMS platform and, over a period of time, move towards an integrated financial management system through computerization of the budget exercises.
To strengthen the department, the CM said its manpower shortage will be addressed, and that two officers of the secretary level will be deputed to the finance division.
On budget preparation, Khandu called for an “inclusive and realistic budget that should incorporate the aspirations of the people.”
Stating that the department should focus on a long-term perspective plan and accordingly plan the current year’s budget, he asked the planning & investment division to bring out a perspective plan for the state.
“Immediately after the budget is announced, the works departments must get approval of funds from the finance department, so that last-minute rush during the fag end of the financial year can be avoided,” Khandu said.
Deputy Chief Minister Chowna Mein, Chief Secretary Satya Gopal, the principal finance secretary, the finance secretary, and officers of the department were present at the meeting. (CMO)