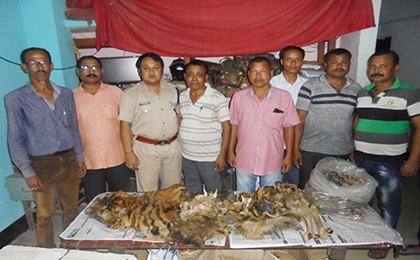 [ Prafulla Kaman ]
RUKSIN, Jun 9: Sleuths from the Guwahati office of the Wildlife Crime Control Bureau, with the help of forest and police department officials of Assam and Arunachal, nabbed three animal organ traders at the Assam-Arunachal boundary, near the check gate here in East Siang district, on Sunday afternoon.
The team seized the dried skin and organs of a fully grown Royal Bengal tiger from the possession of the trio, along with the Hyundai EON car (AR-09-A-8046) used by the offenders.
Based on a tip-off, the officials intercepted the offenders in the Jonai-Ruksin area and arrested them. The trio had brought the animal parts wrapped in a plastic gunny bag in the car.
The persons involved in the crime have been identified as Taying Joshi (driver) of Nari (Lower Siang), Tajing Jomyong (53) of Kebang (Siang), and Jobang Paro (51) of Kaying in Upper Siang district.
The trio is currently in the custody of the police in Jonai, Assam, where they are being interrogated by police and forest officers.
“The offence report against the trio will be drawn under sections of the Wildlife Protection Act,” said Jonai Forest Range Officer (T) Fakrul Islam.
The accused have reportedly stated that they had bought the tiger skin and organs from a person in Tuting in Upper Siang district of Arunachal, and had meant to sell them to an interested party.