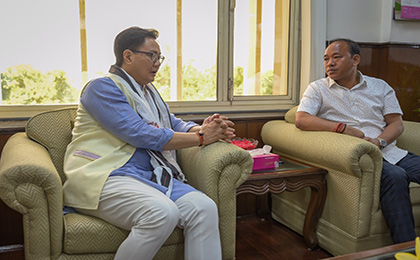 NEW DELHI, Jun 10: Union Youth Affairs & Sports Minister Kiren Rijiju on Monday said he would try his best to bring as much sports infrastructure as possible in Arunachal Pradesh.
Rijiju said this when the state’s Youth Affairs & Sports Minister Mama Natung met him at his office here and apprised him of the infrastructure deficit hindering the overall development of games and sports in Arunachal.
The two also discussed the prospects of youth affairs and sports in Arunachal, including avenues under the ‘Khelo India’ programme.
Admitting that Arunachal is the only state which does not have a well-structured sports stadium, Rijiju said
he would make every possible effort for development of sports infrastructure in the state.
He said he would soon be visiting Arunachal to assess the ongoing projects under the ministry.