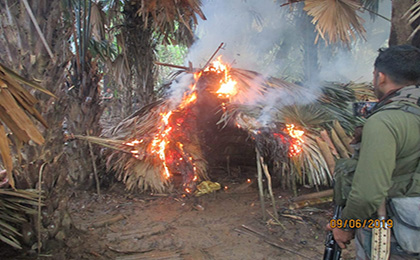 CHANGLANG, Jun 10: Security forces busted a camp of the NSCN during a joint operation in Changlang on Sunday.
A joint team of the Assam Rifles (AR) and the state police conducted an operation in suspected areas of Yukhi village, resulting in destruction of the camp, according an AR source.
It, however, did not mention which faction of the NSCN was the one to suffer the loss.
The camp had infrastructure to accommodate and train about 35-40 operatives.
According to the source, the recent arrest of the NSCN’s operatives, including its operation commander, last month, and the busting of an underground camp “have caused a huge setback to the NSCN.”
It said the group was actively trying to recruit and train youths of Changlang to fill the void created by the arrests of a large number of operatives in the last two months. (DIPRO)