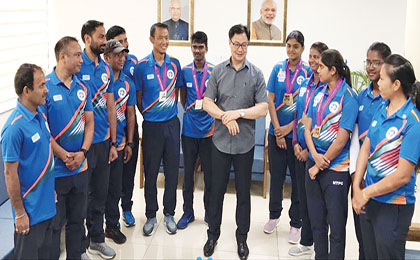 NEW DELHI, Jun 19: Union MoS (Independent) for Youth Affairs & Sports, Kiren Rijiju, on Wednesday felicitated the Indian archery contingent for their superlative performance in the World Archery Championship held in Hertogenbosh, Netherlands, last week, which has earned India an Olympic berth.
Meeting the archers at the Sports Authority of India headquarters here, the minister congratulated them for winning an Olympic quota for Tokyo 2020 and bagging three medals in the championship.
India won one silver and two bronze medals at the event, making it the best ever medal haul for the country in an archery world championship. India had won two silver medals in the same event in 2015, which is the country’s second best performance in the championship.
The Indian men’s recurve team, comprising Atanu Das, Tarundeep Rai and Pravin Jadhav, won a silver medal in the championships.
Das made his international debut in 2008, and his current world ranking is 22. Rai, who started his career as an archer in 2003 at the age of 19, was also a part of the last Indian men’s recurve team that won a silver medal in the 2005 World Archery Championship.
Jadhav started his career in athletics, and took up professional archery a year into his training in athletics, and has excelled in it. The son of a daily wage labourer, he said though equipment for archery is expensive, was able to pursue the sport because of the support he has received through government schemes.
With this year’s silver, the men’s team has earned a quota in next year’s Tokyo Olympics, which also assured the Indian men three full athlete quotas in the individual recurve event at the Olympics.
In the women’s category, Jyothi Surekha Vennam won India’s first individual medal in the women’s compound archery as she clinched a bronze medal following a shoot-off win over Turkey’s Yesim Bostan. Vennam is also a trained swimmer and entered the Limca Book of Records at the age of four for crossing the Kaveri river three times.
This was also Vennam’s second world championship team medal, as she was a part of the Indian team that won silver in the 2017 World Championship. Vennam had won five mixed team medals in world cup events in 2018, including the World Cup final.
The Indian women’s compound team has had a stellar run since the beginning of 2018, when they won the silver medal in the Asian Games, as well as the silver in the Berlin and Antalya World Cups. Vennam and Muskan Kirar were part of all these victories.
Kirar’s first international win was in 2017, but her big win before the world championship was the gold medal in the women’s compound final event at the Archery Asia Cup, Stage-1 competition in Bangkok, Thailand, in March 2018.
Speaking about the achievements of the young archers, Rijiju said, “Our men’s and women’s archery teams have just come back from the world championship and I am very happy that the men’s team has already won an Olympic quota, and even the women archers are very confident.
“India has traditionally been very strong in archery, and if we can win an Olympic gold in the sport, we will be able to prove that. The government is going to extend all assistance to these players, and also to those who have performed well in other sports and have the potential to win an Olympic medal. We will provide whatever support the athletes ask for – be it in coaching or technical facilities.”