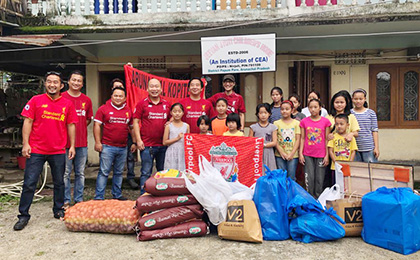 ITANAGAR, Jun 19: After the Mizoram fans celebrated Chelsea’s UEFA Europa League win by donating blood in Aizawl, Arunachal’s Liverpool fans on Wednesday conducted a charity drive for an orphanage in the capital to celebrate the English club’s UEFA Champions League victory.
“We enjoyed the win and the sixth trophy, and we wanted to share our joy. We can’t really do much since we are not funded by anyone and are a small group; so we did whatever little we could,” said Ranju Dodum, a journalist who is the president of the group based in Itanagar.
Liverpool beat Tottenham Hotspur 2-0 to win their sixth title on 1 June in the final match which was played in Madrid.
“It was a small thing. We aren’t a big group and most of us, who are already in our 30s, have been supporting Liverpool even when the team wasn’t winning any major trophies. Someone like Steven Gerrard, who was an influential and talismanic figure in the club, always had a ‘never say die’ attitude. That attitude was on display also during the second leg of the champions league match with Barcelona this season,” said Dodum.
As a part of their celebration, the fans of the Reds donated food and other essential commodities at the Jeevan Jyoti Children Home, an orphanage based in Nirjuli. It’s run by a couple – Hibu Tagia and his wife Hibu Meena. It currently hosts 12 girls as wards.
“They prayed for our individual success as well as the club’s, which was nice,” said Dodum.
Though they have been longstanding Liverpool supporters, it’s been just two years that they started to get together to watch the matches together and celebrate through a WhatsApp group – Arunachal Kopities. Now, they have named themselves the ‘Arunachal Liverpool Supporters Group’.
“Currently, we’re around 18 of us. We used to show up for match screenings at pubs in Itanagar, wearing our jerseys, and fans of other clubs would ridicule us and often remind us of how the club hadn’t won the league in so many years. Banter is common among rival fans, so these things happen,” Dodum said.
“Regardless, we’ll continue doing what we can and keep supporting the club we love. As the team slogan goes: You’ll never walk alone,” he added.